This is also the day that K-State picked up their last victory against Oklahoma State in Stillwater. Coming off a bye week, the Wildcats have a chance to break their four-game losing streak at Boone Pickens Stadium.

“Well, it is tough if you do not play well,” Snyder said in a press conference regarding the losing streak. “If you play well, it probably was not all that hard. Beyond the last two trips down there, and really the only one that is significant right now — the last trip we were down there in 2013 — because we have a few players that were there at that point in time.”

Snyder went on to describe K-State’s last trip to Stillwater, a game that the Wildcats lost 33-29.

Coming off a 39-33 triple overtime victory over the Louisiana Tech Bulldogs, the Wildcats spent a majority of the bye week improving on an offense that struggled in the red zone.

So far through three games in 2015, K-State ranks 71st in offensive efficiency and has seen only eight touchdowns from inside the 20-yard line as compared to eight field goals from inside the red zone.

The Wildcats are optimistic that the bye week has given them the opportunity to address these issues as they head toward Saturday’s matchup.

On the defensive side, once again the Wildcats will be going up against a team that runs an uptempo, spread offense.

Having seen it various times, the Wildcats now have to deal with a possible new wrinkle. Oklahoma State trotted out two quarterbacks in their victory over Texas last week, and now the Wildcats are prepared to see if the situation presents itself once again.

“It keeps you on your toes because you do not know who is going to be in or what they are capable of,” K-State linebacker Elijah Lee said. “Both of them can run and pass. We just have to be alert.”

Lee, along with junior linebacker Will Davis, leads a defensive unit that is in the top half of total defense in the country. Even though they’ve held opponents to 237 yards per contest and limited the opposition to an average of 12 points per game, they have yet to grab an interception through the first three games of the 2015 campaign.

“Oh, definitely,” Davis said to K-State Sports about getting an interception. “Any time you have an offense like Oklahoma State who throws the ball around, it is going to give us opportunities. We are looking to get one and hopefully change the momentum of a game.”

Coming into the matchup, the Cowboys are well aware that although the Wildcats have not picked up an interception this year, they present one of the more difficult matchups in the conference.

“They’re a very disciplined team and that’s what a typical K-state team is with Coach Snyder,” Oklahoma State receiver David Gildden said to Oklahoma State media. “You have to give them a lot of credit for what they do. One of our coaches told us earlier in the week that over that past three years, they’ve given up the least amount of plays more than 25 yards, or something around that, out of everybody in the NCAA. That shows how sound they are in what they do, their defensive base and how they’re structured.”

K-State and Oklahoma State will kick off Saturday at 3 p.m. in Stillwater, Oklahoma. 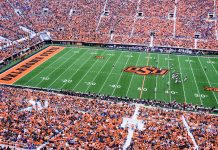 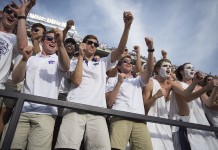 K-State looks to be more efficient against Louisiana Tech