The Baker Trio, Sky Orchid, Chase Fortune, The Lads and Vineyard participated this year for cash prizes and a chance to show people what they love to do.

The Lads, which the judges called an “Oasis-styled band,” won first place and took home the grand prize of $500. The audience danced, sang along to their songs, shouted and clapped during the band’s entire 15-minute performance.

Conner Giles, a full-time musician from Nebraska and guitarist of The Lads, said the band wasn’t expecting to win and just came out to have fun.

“We practiced very little, so we were just kind of winging it for fun,” Giles said. “It would have been fun either way.”

Friends, family and students showed up to support the bands and enjoy some music. Alex Jirgens, junior in journalism and geography, joined the crowd to support his friend, Chase Fortune, senior in mass communications.

“One of my good friends, Chase Fortune, is performing tonight, and I figured I might as well give him some love and show up and support him,” Jirgens said.

Fortune was the only solo artist performing; he won the $250 prize for second place.

Bass player of Sky Orchid, Aaron Bolli, graduate student in architecture, said he was excited to play for the crowd.

“I’m excited to play; it’s always fun to play music,” Bolli said. “I’ve done battle of the bands before, so I’m not super anxious or anything. It’s just another opportunity to go out and play music for people.”

Sky Orchid was founded by brothers Gabriel Traknyak, vocalist, guitarist and graduate student in architecture, and Daniel Traknyak, the band’s drummer and freshman in architectural engineering. This was Sky Orchid’s first time competing in the OPUS Band competition. They won third place and a $100 prize.

Gabriel Traknyak said that the band was just out there to have fun with no intention to win.

While this was the 29th OPUS Band Competition, UPC added a few new features to entertain the audience both near and far. This included catering by the Friendship House food truck, which was free to audience members.

“I spent all week getting pre-production stuff ready,” German said. “I think it’s the first time I see our truck at Student Union’s plaza.”

Wildcat Watch interviewed one or two performers after each performance. Students from the UPC presented each band while KSDB 91.9 was in charge of the entertainment in between bands.

“It’s one of the oldest events of the UPC, we love putting it up and we hope to do it again,” Buckley said.

See more photos from the event 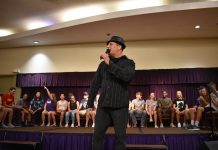