Boykin never fails to impress. Throwing for 332 yards and five touchdowns, he completely decimated the Texas Longhorns’ defense, leading his team to a 50-7 victory.

A newcomer to the list, Rudolph deserves the second spot thanks to his superstar performance against K-State. He single-handedly led the Cowboys to victory with 437 passing yards with three touchdown passes.

Turpin seemingly came out of nowhere with a stunning showing. He created chaos amongst the Longhorns’ defense as he caught six passes for 138 yards and four touchdowns. Yes, you read that correctly, four touchdowns on six receptions.

Coleman caught seven passes for three touchdowns and 110 yards in Baylor’s 63-35 victory over Texas Tech. The Tech defense simply did not have an answer as Coleman wreaked havoc on the Red Raiders.

Cook might just be the craziest story in all of college football this week. K-State starting quaterback Joe Hubener was injured on the Wildcats’ first drive and with injury after injury to K-State’s quarterbacks, the fifth string quarterback just so happened to be Cook. He shocked audiences as he stepped up to the plate and threw 16 passes, completing 10 including two touchdowns. He also ran for 87 yards and a touchdown.

This Oklahoma quarterback is no stranger to this list, and for good reason. Mayfield tossed three touchdowns on 320 yards for the Sooners as they toppled ranked opposition West Virginia 44-24.

Linwood consistently exposed the Texas Tech defense on Saturday as he racked up 221 rushing yards on 20 carries, including two touchdowns.

Seth Russell threw four touchdown passes against Tech, completing 15 of his 23 attempts for 286 yards. Russell is looking more and more comfortable in the pocket each week.

Doctson, despite being overshadowed perhaps by the dominance of Turpin, still managed to catch seven passes for 129 yards. He had two touchdowns, even on a day where Turpin stole the show.

Mahomes, though losing to the Baylor Bears, still chalked up a formidable showing. He threw three touchdown passes and had 415 completion yards in a 63-35 loss on Saturday. 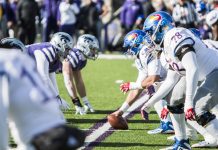