Northwestern (13) at Michigan (18)– This is the game where we see if Northwestern is for real or not. They are coming off a 27-0 victory over Minnesota at home; however, it is no easy task going to Michigan to play. Michigan seems to have found its stride after winning comfortably at Maryland 28-0, so look for them to take advantage of being at home. This game can be seen at 2:30 p.m. Saturday on the Big Ten Network.

Georgia (19) at Tennessee– Georgia is coming off a major defeat after losing 38-10 to Alabama. Everyone expected Georgia to put up a fight and even possibly win the game; however, the Bulldogs did not do that. This will be a reality check for Georgia to see if they can regroup from a big loss. Tennessee is coming off their own disappointing 24-20 loss to Arkansas. With a win, Tennessee could still be in the SEC East hunt, but that won’t be easy against Georgia. Catch this game at 2:30 p.m. Saturday on CBS.

Florida (11) at Missouri– Florida seems to be one of the surprise teams of the year in the SEC East as they defeated the top-five Ole Miss team 38-10 last week. This game will be a new test for the Gators, however, since they are playing away from home. Missouri defeated South Carolina 24-10 and will be playing with backup quarterback Drew Lock after an indefinite suspension of starter Maty Mauk. The Tigers will be tested against a good Florida defense. This game can be seen at 6:30 p.m. Saturday on the SEC Network.

Miami (FL) at Florida State (12)– At one point in time, this was the best college football rivalry around. If Miami wants to get back on the college football map, this game could be a stepping stone for them to do just that. Miami is coming off a Thursday night loss to Cincinnati by a score of 34-23. Florida State, meanwhile, is coming off a close victory against Wake Forest 24-16. This is a primetime game kicking off at 7:00 p.m. Saturday on ABC.

California (23) at Utah (5)– College GameDay is in Utah this week for the Cal at Utah game. Cal has been a surprise team this year and will be going into this matchup with a perfect record after defeating Washington State 34-28. This can be a game where the Golden Bears prove how good they are against a tough Utah team. Utah rose to number five in the polls after having a bye week. The bye week should have helped Utah rest and prepare for this game, which can be seen at 9:00 p.m. Saturday on ESPN.

Johnson reunites with former team with a big win in Bramlage

K-State women knocked out of NCAA Tournament by Michigan 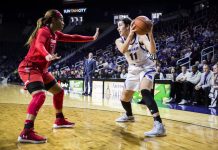 What to watch for: Week 4