The K-State men’s golf team is competing in Baton Rouge, Louisiana this weekend in the David Toms Intercollegiate tournament at University Club.

K-State is one of 11 teams who will be participating in the tournament. Notable schools competing are Iowa, host-school LSU and Liberty who are all in the top 40 for Golfweek’s men’s collegiate rankings. Fellow Big 12 member Iowa State is also traveling to Baton Rouge.

The men’s team is coming off of a fourth-place finish at the Golfweek Conference Challenge in Burlington, Iowa just two weeks ago. All of the team’s scores were under 300 and the Wildcats were only 10 strokes away from the University of Iowa, who won the tournament.

Highlighting the last tournament individually for K-State was freshman Jeremy Gandon. Gandon shot a tournament score of 11-under par and won the individual championship.

Sophomore Oscar Spolander is another golfer who K-State will need to play well if they want to finish highly as a team.

Spolander had the second best score for the Wildcats in Iowa, after he tied for 16th place individually shooting three-under par for the tournament.

Senior Kyle Weldon will no doubt be looking for improvement this weekend. Weldon placed fifth individually at the Rod Myers Invitational on Sept. 13 and was hoping to match that finish two weeks ago at the Golfweek Conference Challenge.

Weldon struggled in Iowa as he shot only one-under par and finished tied for 21st place. If K-State wants to make a run at the team championship this weekend, they will no doubt need Weldon’s senior leadership to help them get to the level they need to be at to be competitive.

Junior Matt Green will be looking to improve this week. Green struggled at the Golfweek Conference Challenge as he shot nine-over par and finished the tournament in 51st place overall.

The final competitor for the Wildcats this week is junior Connor Knabe, who will be back in action for the first time since the Myers Invitational where he shot 13-over par and tied for 47th. 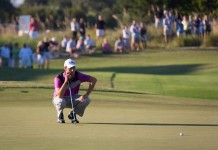