Yesterday, an extra large dose of chaos was dropped into the vacuum of House Republican leadership. After Speaker of the House John Boehner’s resignation, House Majority Leader Kevin McCarthy looked like he was in position to take over, running for speakership as the heavy favorite.

But yesterday morning, on the day of the vote for speaker, McCarthy dropped out of the running entirely – resulting in widespread shock and disarray.

“Over the last week, it has become clear to me that our conference is deeply divided and needs to unite behind one leader,” McCarthy said of his decision. “I have always put this conference ahead of myself. Therefore, I am withdrawing my candidacy for speaker of the House.”

Ultimately, the same forces within the Republican Party that effectively drove Boehner out have claimed another victim; McCarthy did not seem to believe he could unite his fractured party. Crediting this belief, the Boston Globe quoted Representative Tim Huelskamp, Republican of our very own state of Kansas, as saying, “We’re looking for a speaker who works with the conservatives, not against us.”

As Politico further detailed after yet another potential candidate’s decline of the nomination in the Oct. 8 article “Behind McCarthy’s decision to bail,” the fractured disarray of the party doesn’t seem to have a ready alternative:

“There was an immediate effort by senior Republicans to try to convince Rep. Paul Ryan (R-Wis.) to reconsider his resistance to the speakership. He is seen as one of the only House Republicans who has the stature to unite all factions in the conference. Ryan immediately put out a statement saying he, too, wasn’t the guy.”

McCarthy seems confident in his decision to refuse the nomination.

“The (Republican) conference is in an odd place,” McCarthy said in an interview with Politico. “Sometimes you gotta hit the bottom to be able to come back.”

Not only are there significant unity problems in the House of Representatives, but there are also issues for Republicans in the upcoming presidential election. Not only is this fractured party allowing an environment for the success of candidates like Donald Trump and Ben Carson, but there are worrying signs for their 2016 endeavors no matter who the eventual GOP nominee is.

There are troubles with the electorate.

One huge issue is that, looking at recent election results, Republicans seem to be losing an ever-growing percentage of nonwhite voters as detailed in the Washington Post’s article, “Republicans’ 2016 math problem, explained in two charts.” One chart details that while the GOP is becoming more dependent upon white votes, they are making up less and less of the total electorate.

This troubling facts play into another huge worry that some Republicans have had since the results of the 2012 race; the Electoral College math is heavily favoring Democratic nominees this next election and seemingly in the future, spurring worry of a “Blue Wall.”

Chris Ladd, author of the conservative blog “GOP Lifer,” said that after the 2014 midterms (seen as a huge Congressional Republican victory), “Few things are as dangerous to a long-term strategy as a short-term victory. Republicans this week scored the kind of win that sets one up for spectacular, catastrophic failure and no one is talking about it.”

Ladd was referring to the “Blue Wall” that seems to have formed for Democrats – a wall of securely blue states in general elections that he and others now argue includes Pennsylvania, Nevada, Wisconsin, New Mexico and New Hampshire. This, according to Ladd, would mean that “at the outset of any Presidential campaign, a minimally effective Democratic candidate can expect to win 257 electoral votes without even trying. That’s 257 out of the 270 needed to win.”

It might take a few election cycles, but it seems to me that a Republican Reformation, or at the absolute very least a hugely significant refocusing, needs to take place to realign with the general populace. I would also argue that there are nodes of hope for this shining though the current chaos.

Paul Goldman and Mark Rozell argue that one of these nodes of hope is in fact one of the current signs of Republican disarray in their Politico article “Why Trump Is Good for the GOP.” Perhaps Trump is exactly the “bottom” the GOP needs to come back from that McCarthy mentioned earlier today.

“(Trump) knows the vacuum created by not having a compelling peace or prosperity message leaves an opening for a non-traditional self-funded candidate skilled at using secondary, hot-button issues to his advantage,” they said.

Therefore, they argue, Trump is “not a cause of the GOP’s problems, but rather a potent symptom of its yet unsuccessful effort to craft a compelling platform.”

Some in the party are already trying desperately to construct a better conservative platform for the Party and its voters. Jay Faison wrote a Politico article on July 19, entitled, “I’m a Republican. I Want My Party to Tackle Climate Change,” in which he argues that “energy policy should be a powerful tool in the coming Republican resurgence, but for too long we’ve ceded the issue to the Democrats.”

Faison continues to say that, “If conservatives fail to put forward our own agenda, climate change policy will likely go the way of health care — the Democrats owned the answers, and we ended up with Obamacare,” and that “We need — and I believe we’re developing — better answers, genuinely conservative answers that do exist in the realm of proven fact, technological finding and smart forecasting.”

There are clearly opportunities for better Republican discourse on certain issues, climate change being one example, to stop isolating the Republican party in its own hyper-conservative base and appeal to more voters. The hugely popular Pope Francis is another potential guiding point for how to better represent your own personal religious beliefs without caving in to the toxic trap of pushing religion where it should not go, such as in our secular schools and government.

This desperately needed platform restructuring needs to happen within our politicians, but it really starts with conservative voters. The party of personal responsibility really needs to take some time for personal reflection and take some damn responsibility. 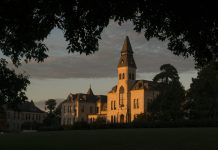 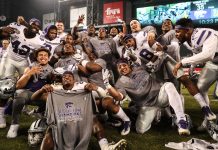 OPINION: Words of wisdom to underclassmen from graduating senior

Out with the old: K-State moves into second year phase-in of...