Home Featured Home K-State shocks the nation at half, up three scores on No. 2...

Things started poorly for the K-State defense as TCU running back Aaron Green seemingly broke through, untouched, for a 86 yard touchdown run to put the Frogs on the board.

K-State would respond led by a surprisingly agile Joe Hubener as he cut his way down the field with the help of the quarterback option and eventually pounded it in from two yards out to even the score up a 7-7.

At the start of the second quarter K-State would knot up the score at 14 all after a big 25 yard completion to Kyle Kyle set up an eventual 17 yard quarterback run by Hubener.

K-State’s defense would show some weakness in the next drive letting Boykin have several easy and open throws but the Wildcat front seven’s pressure would lead Horned Frogs kicker Jaden Oberkrom to knock in a 50 yard field goal to give TCU a 17-14 lead.

Immediately following that, fueled mostly by several TCU penalties, K-State drove their way down to the past the 30.

Then the ball was put in junior running back Charles Jones’s hands and he broke free for a 28 yard touchdown run, the longest of his career, to give K-State their first lead of the game at 21-17.

The Wildcat offense wouldn’t stay on the sidelines for long though as K-State recorded it’s second interception of the game as senior defensive end Marquel Bryant affected Boykin’s throwing motion allowing sophomore linebaker Elijah Lee to come down with the pick.

Taking over on the 24, a 13 yard pass from Hubener to Burton and a 7 yard run from Hubener would set up Jones to once again punch it in from 7 yards out to give the Wildcats a 28-17 lead.

TCU would punt on the ensuing drive and after a errant puint only goes for 13 yards, the Wildcat offense would set back up at 40.

K-State would keep it on the ground as Hubener methodically drove K-State down towards the endzone led mostly by a 26 yard run to set up a one yard grind-it-out touchdown that would give K-State a three possession lead at the half at 35-17.

The Wildcats are dominating in time of possession, leading TCU 22:47 to 7:13. 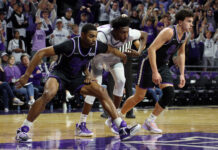 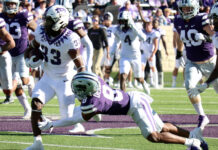