It’s really tough to outscore TCU, but the Wildcats were on the brink of doing that Saturday night.

They had the ball for nearly twice as long as the Horned Frogs, which is really hard to do against one of the best defenses in college football. Sophomore quarterback Joe Hubener had four rushing touchdowns and showed great promise with the one-two punch between him and junior running back Charles Jones.

Speaking of Jones, he had himself a night putting up 75 rushing yards and ran with a certain aggression that we have not seen from him before. Jones had a huge 28-yard touchdown run, which helped spark the Wildcat offense.

Hubener also had a great day rushing, but struggled in the passing game. He had seven more incompletions than completions as he went 13-33 in the air for only 157 yards. That has to change going forward because Hubener and Jones need the offense to be a threat in the air for their running games to be effective. Overall, not a bad performance from the offense as I think a high B is pretty fair.

The defense had a great first half of the game after a rough start as they gave up an 86-yard touchdown on the first play from scrimmage. After that, they woke up and held down senior quarterback Trevone Boykin and the rest of the TCU offense for the most part. They allowed 206 total yards in the fourth quarter that allowed the Horned Frogs to erase a double-digit deficit and take the lead.

The Wildcat defense was burnt many times by the potent TCU offense, whether on the ground or through the air. One highlight for the Wildcats defense was the play of sophomore linebacker Elijah Lee as he had two interceptions off Boykin, a Heisman hopeful. The defense will need to step up next week against a very talented Oklahoma Sooners offense.

I was very disappointed by the Wildcat special team’s defense on kickoff returns.

In a high scoring back-and-forth game, your special teams unit needs to make the offense earn as many yards as they can. Horned Frogs freshman kick returner KaVontae Turpin just tore up the special team defense as he went for 122 yards on kick returns and gave TCU good starting position almost every time. If it weren’t for that, the special teams would have received a better grade, but since they didn’t they are passing but not necessarily succeeding.

Avery Osen is a junior in mass communications.

Two more football players arrested, bringing the total to five in less than a week 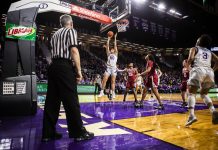 Football team on the verge of boiling