It was time again for a presidential debate Tuesday night in Las Vegas. In this case, it was the Democratic Party’s candidates turn to get on the stage and discuss why they would make the best president. In contrast to the Republican Party’s large number of candidates, the Democrats fielded only five.

Before the debate began, there was discussion of the possibility of Vice President Joe Biden participating in the debate. Biden had been invited by CNN, who co-sponsored the debate with Facebook, but did not attend.

The evening began with opening statements and a chance for both well-known and lesser known candidates to speak about their plans and beliefs.

Once opening statements were completed, moderator Anderson Cooper began asking the candidates questions that ranged in topic from national security to gun legislation, with a variety of issues in between.

In Manhattan, there were many people waiting to hear what the candidates had to say before the debate started.

“I think the candidates will have a good debate and get to expand on the issues everyone is waiting to hear about,” Alexa Jacobs, senior in biological systems engineering, said.

“The media likes to follow the Republicans because of the entertainment value,” Jacobs said.

The candidates were given the chance to defend themselves on specific issues. For example, when Clinton was asked about the issue of her email server and the Benghazi incident, she had a brief response.

“It is really unfair to not look at the entire issue,” Clinton said.

Sanders was asked about his choice to use his conscientious objector status during the Vietnam War and how his record on military issues could make it difficult to be Commander in Chief.

“I opposed the policy of the Vietnam War, not the soldiers who risked their lives fighting in it,” Sanders said.

It was not just the candidates’ chance to defend themselves, it was also a time for them to divulge their plans and beliefs.

O’Malley expressed his support of same-sex marriage, brought up the issue of climate change and spoke of his passion to have the U.S. using clean fuel sources by 2050.

Sanders discussed what “democratic socialism” is and why he identifies with it.

“It is the belief that it is immoral and wrong that the top 10 percent of people own the same amount of wealth as the other 90 percent,” Sanders said.

Michael Gassmann, chair of the Riley County Democrats, said he was pretty excited to listen to the debate.

“I am ready to see where the two big candidates (Clinton and Sanders) are at, and am looking forward to a debate full of substance,” Gassmann said.

Carolyn Gardner, senior in political science and French, with a secondary major in international affairs, said she identifies as a Republican. She said she feels as though this debate will “lay the framework for how each candidate thinks on the issues.”

In the end, the candidates were given the chance to expand upon their beliefs and discuss issues.

“The debates give the casual viewer a better idea of where the candidates come from,” Gassmann said. “I am ready to hear what the candidates have to say on a wide variety of topics.” 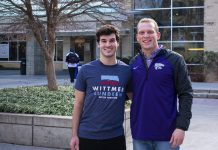