McCain Auditorium was packed Wednesday evening as students and faculty attended Wes Moore’s lecture on his book, “The Other Wes Moore.”

During the lecture, Moore, a Rhodes scholar and U.S. Army veteran — talked about the intentions and motives behind the book.

“The hope was that you would see that this book is not just about these two kids from Baltimore,” Moore said. “It’s about all of us. It’s about the decisions that we make in our lives and the people who help us make those decisions.” 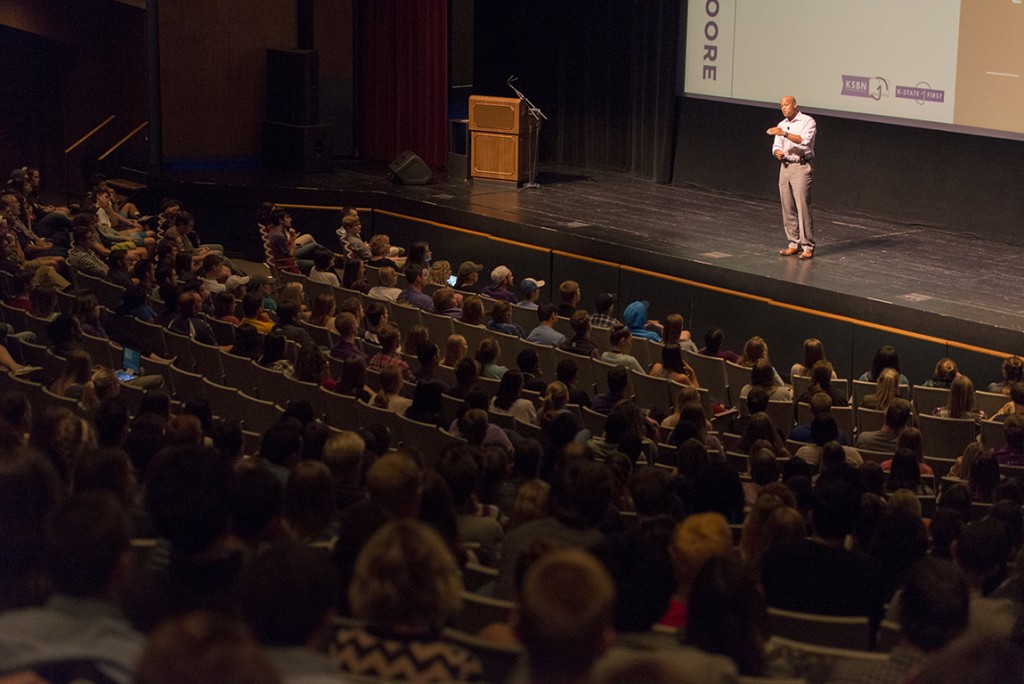 The book, which was chosen as this year’s common read by the K-State Book Network, features the stories of Moore and another individual also named Wes Moore. Despite sharing the same name and similar backgrounds, the two men lived extraordinarily different lives; the author Moore battled adversity and found success as a military man and scholar, while the other Moore struggled to support himself and is currently serving a life sentence for murder.

In the book, Moore examines key points and watershed moments in the lives of the two individuals that guided them along their respective paths; however, Moore said his book attempts to tell the story of not just the two individuals, but every person that has ever faced adversity.

Moore also discussed the death of Freddie Gray earlier this year and the subsequent riots and response by the Baltimore Police department. The event was deeply personal to Moore, he said, since both he and the other Moore grew up in Baltimore.

At the end of the lecture, Moore challenged the students in the audience to consider their personal convictions.

“Who will you stand for?” Moore said. “Whose life will matter to you when it doesn’t need to? That’s what your higher education is supposed to mean.”

A key theme throughout the book is the importance of mentors in the lives of young individuals, especially children who might not have a stable family life at home.

“Other people definitely play an important role in determining my future,” Jasmine Schick, sophomore in criminology, sociology and psychology, said. “I think that a lot of times, I forget about the people that have helped get where I am and that help me today.”

“I think it’s important for college students to recognize and find the people in their lives that can really help and guide them throughout their college careers,” Thrush said. 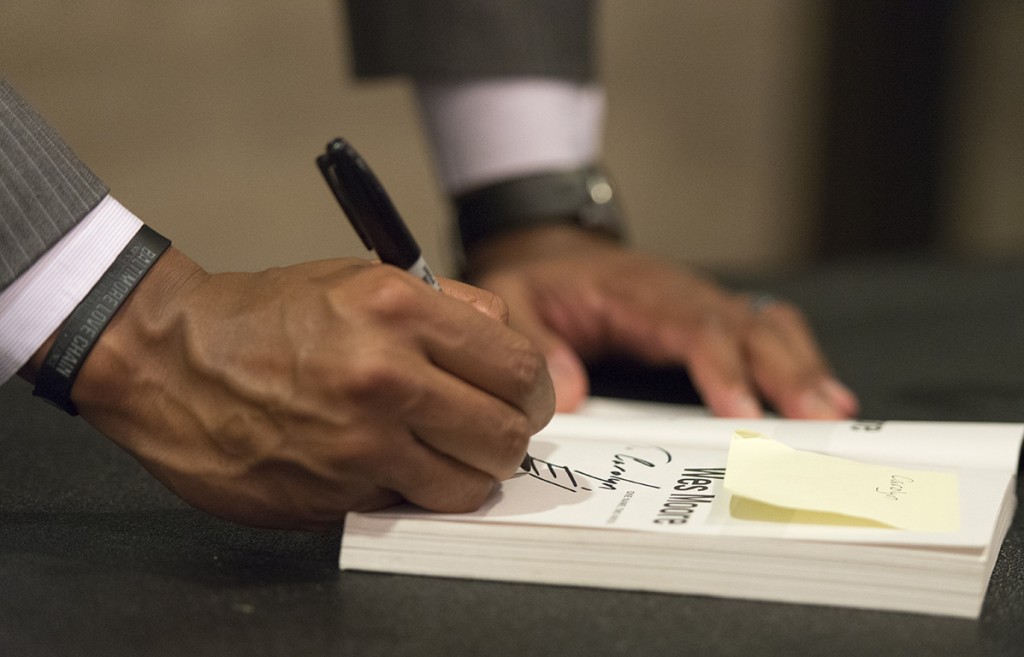 According to its website, the K-State Book Network, in conjunction with the K-State First program, is charged with selecting a common book for incoming freshmen to read to help students transition from high school to college, providing a common experience across the student body.

Tara Coleman, chair of the Kansas Book Network committee, said that the process for selecting a common book for the campus starts as early as a year and a half before the start of the semester in which the book will first be used.

“We plan the book a year in advance, and it starts with selecting a committee,” Coleman said. “For ‘The Other Wes Moore,’ our committee was actually 55 people, which was giant.”

In the case of “The Other Wes Moore,” the committee of students and faculty was selected in March of 2014 with the aim of determining student interests and preferences in the selection of a common book, according to Coleman. Some key considerations are whether the book is in paperback format, the length of the book and the availability of the author to speak on campus.

After the selection of the committee, the members then offer suggestions which are read during the summer, Coleman said. In August, the committee votes on a preliminary list of 12 possible books, which are scrutinized throughout the semester until the list is narrowed down to three books.

At the end of the semester, a single book is picked and presented to the provost. After the provost’s input, the book is formally announced to the university in the spring, according to Coleman.

The other two books in consideration for this year’s common read were “I Am Malala” by Malala Yousafzai, who wrote the book over her experiences as an advocate for girls’ education in the Middle East, and “The Boys in the Boat” by Daniel James Brown, which narrates the true story of the American rowing team at the 1939 Olympics.

Coleman said “The Other Wes Moore” was chosen for its themes and relatability to students’ lives.

“(Moore’s) story is something that our students will be familiar with,” Coleman said. “We have students who maybe grew up in lower income areas or were raised by single parents. Even if they did not have the same life, they’re familiar with the issues that he or the other Wes Moore went through.”

A difficulty that often occurs in selecting a common book is the applicability of the book to every department at the university. Coleman said that while it is not always possible to select a book that is relevant to every department, the committee attempts to incorporate all people and disciplines into the books.

“We try to come up with ideas for activities for people that may not have a direct connection to the book,” Coleman said. “Maybe this book doesn’t directly apply in a science class, but it could be an opportunity for trying to engage underrepresented groups in the field, and the book could definitely be a starting point.”