The K-State rowing team is traveling to Lawrence on Sunday for the Jayhawk Jamboree.

The Wildcats had some strong performances in the Head of the Oklahoma event on Oct. 3.

While those performances might seem solid for the first race of the season, K-State head coach Patrick Sweeney said he felt otherwise about the varsity boats.

“Varsity did not execute the required race plan, so they under-performed,” Sweeney said to K-State Sports. “I hope that they learned and do better in two weeks.”

Sweeney said he was very happy with the performances of the Novices, however.

“The novices came out strong on their first-ever races,” Sweeney said. “Now they must continue their growth.”

If the varsity boats and novices can build on what they have established in the first event of the season, then fully expect the Wildcats to have a big weekend at the Jamboree.

The Wildcats used this success in the final fall event last year to springboard them to a third-place finish in the Big 12; this year’s team will be looking to do the same.

The teams competing in the Jayhawk Jamboree this year are Kansas, Tulsa, K-State, Iowa and Creighton.

The event will take place at the Kansas Rowing Boathouse, which is located on the Kansas River. The first races are at 11:15 a.m., with the last race scheduled to start at 3:30 p.m. 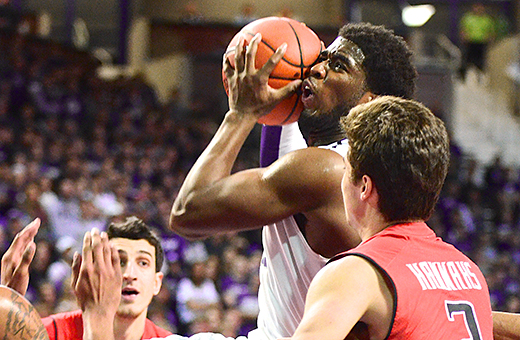 K-State has more to play for Saturday than just Big 12...