It’s common to have bad dreams, it’s practically expected. However, for the K-State program, the same nightmare has come two weeks in a row.

Now, as the Wildcats are in the heart of their early season Big 12 death march, the welcome possibility one of their most difficult tests, an Oklahoma Sooners team that the Wildcats have not beat at home since 1996.

“We were angry after that OSU loss because that was a tough loss coming down to the wire, and this one just adds fuel to the fire.” Hubener said to the media Tuesday. “We are tired of losing these tough games because we know that we can play with anybody, and we showed that. TCU is a great team and we played right with them the whole game. We fully expect OU to come in here prepared, but we want this win.”

For the third straight game, the K-State defense faces a high-powered offense, the Sooners average 37 points per contest and feature the high powered quarterback-running back combo of Baker Mayfield and Samaje Perine.

The dual threat quarterback Mayfield has compiled a total of 18 touchdowns and over 1,500 yards passing in the 2015 campaign.

In his second season as the Sooners feature back, Perine has already gone over 2,000 yards for his career and has scored four touchdowns this season.

Even with the vast array of options on offense, linebacker Will Davis said he sees some similar things between this year’s offense and the one they went up against a year ago in Norman, Oklahoma.

The Wildcat offense, which had struggled this season, has come alive in the last few weeks.

Quarterback Joe Hubener is coming off a gutsy performance against TCU where he scored four touchdowns and put up 268 yards of total offense. The K-State offense as a whole looks to continue it’s current success in Big 12 with 39.5 points per game during conference play.

Even with the improvement of the offense and pushing two ranked teams to the brink of defeat, the Wildcats have yet to overcome those second half struggles that currently have them sitting at 0-2 in the Big 12 with a ranked Oklahoma team coming off a devastating loss to Texas.

The Sooners will be angry and so will the Wildcats, even if they’ve had meltdowns in the eyes of K-State fans, this Wildcat team remains focused on the goal of springing a big upset this Saturday.

“We have Oklahoma coming in, another ranked team here at home,” freshman center Dalton Risner said. “We know what we can do. Looking back at these past two weeks, everyone knows we need to work on finishing, but everyone knows what we are capable of and we are excited. We need this win, we need some morale and we need some uplift to get this season going because we have a lot of football left to play. No matter what it takes or how ugly it gets, we just need to roll out of this Saturday with a win.”

Two more football players arrested, bringing the total to five in less than a week 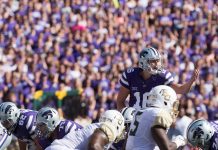 Even on a bye, you should still like K-State’s bowl chances