For the first time in over a month, the K-State volleyball team won consecutive matches after dismantling the Oklahoma Sooners Friday night in three sets at McCasland Field House in Norman, Oklahoma.

This was the first time the Wildcats have won against Oklahoma since 2008.

K-State has won its last six sets played in the Big 12 after beating the West Virginia Mountaineers in straight sets at Bramlage Coliseum on Oct. 10.

The Wildcats were led offensively by junior Brooke Sassin and sophomore Bryna Vogel, who had 11 kills each.

It was a great night for these two and the rest of the offense as they hit over .300 in all three sets and had a total of 43 kills in the match.

In the first set, K-State came out ready to play. They jumped to a quick 11-6 lead before the Sooners got back into the set and trailed 15-13. The Wildcats finished on a 10-3 run to end the set and win 25-16. The set was finished off by Sassin, who had two kills in the final two points to take the 1-0 set lead.

The second set was the most competitive of the night. K-State took an 8-4 lead and always led by at least two points in the set. The Sooners cut the deficit to 22-20 before K-State won three of the final four points to win the set 25-21.

Both teams went back and forth in the third set until the score was 19-17 K-State. The Wildcats used a 6-2 run to end the match with a score of 25-19 against the Sooners and left with their first conference road win of the season.

Junior Katie Brand recorded a season high in blocks, and she had 35 assists, six digs and three kills for the Wildcats. The six digs for Brand was the most by her in a match since Nov. 29, 2014 against West Virginia.

K-State is now 11-7 overall and 3-3 in Big 12 play. They host the second-ranked team in the country, the Texas Longhorns, at 6:00 p.m. Wednesday inside Bramlage Coliseum. The Longhorns are 16-1 on the season and 6-0 in conference play after beating Texas Tech in straight sets Saturday night. 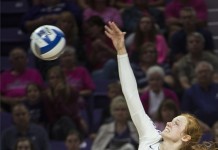 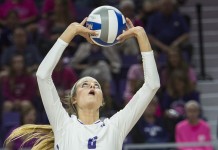 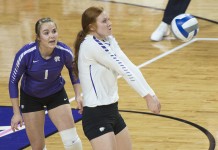