The debate of raising the minimum wage seems to be never-ending.

The current federal minimum wage of $7.25 leaves a full-time worker, based on 260 eight-hour work days, with just $15,080 each year, according to paywizard.org. This amounts to approximately $290 per week.

The national poverty line for a family unit consisting of two people is an income of $14,570 per year, according to minimum-wage.org. A family of two with one income at the minimum wage amount is barely living above the poverty line.

Josh Smith, 19, of Manhattan, said he was able to survive making minimum wage because he lived on his own and did not have to account for any dependents.

“I (used) to make minimum wage, and anyone who lives on their own can hardly make it by on minimum wage,” Smith said. “If you’re single and have no kids, then maybe you could barely get by.”

In his 2014 State of the Union address, President Barack Obama called on Congress to raise the federal minimum wage to $10.10 per hour. Due to a partisan stall in Congress, however, it is unlikely that it will rise from $7.25 in the near future, according to minimum-wage.org.

According to the National Conference of State Legislatures, 29 states have minimum wages above the federal minimum wage. New York has a minimum wage of $8.75, while California and Massachusetts are both at $9. Others have raised their state minimum wages as well, due to a higher cost of living.

States with a lower cost of living – like Kansas, Iowa and Indiana – have seen no changes in the minimum wage.

“Raising the wages of every employee would likely change the price of the product,” Ted Morris, owner of 13 Wendy’s restaurants in Kansas, said.

According to Morris, raising minimum wage would be just the beginning of raising prices and other wages.

“Raising the wage of employees who make minimum wage would be just the start of the process,” Morris said. “Everyone else’s wages would have to be raised too, especially employees who have worked for a few years and earned raises.”

“Being a successful business is being profitable,” Morris said. “The trade-off between your labor costs and the retail cost of your product is what determines your profitability. That’s the real challenge in raising the minimum wage, is doing so without having to cut employees.”

Smith said he believes lawmakers should raise minimum wage so he can pay for his future.

“When I moved out and started to live on my own, I started to get bills,” Smith said. “I had to pick up another job to cover all the expenses. I think the minimum wage should be at the very least $9 in Kansas.”

Seth Eckels, freshman in chemical engineering, said that Kansas’ minimum wage is too low, but raising it to something like $15 would be just as bad. He said he thinks the ideal amount would be about $8.50 or $9.

“Minimum wage isn’t enough for a college student,” Eckels said. “You would have to work so much that you wouldn’t have any time to study if you were paying for your own rent, tuition and books.” 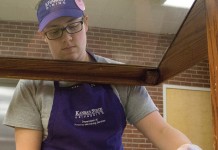 Set minimum wage might not be enough to cover students’ needs

Set minimum wage might not be enough to cover students’ needs