We're SO excited to announce the launch of our new initiative Sesame Street and Autism: #SeeAmazing in All Children! pic.twitter.com/cC3Efchtlq

Tweeters said they love the idea of a new character to celebrate children with autism.

A new autistic muppet. I'm glad that sesame Street will teach kids that there are children who r different. It may be autism,or downs syn.

A new autistic muppet. I'm glad that sesame Street will teach kids that there are children who r different. It may be autism,or downs syn.

Not everyone was thrilled to find out about the partnership between Autism Speaks and Sesame Street. Boycotters of Autism Speaks cite data reports that only 4% of donations to the organization help families with children of autism.

Oh I was looking forward to this,but Autism Speaks is involved in this ? Very troubling indeed. #BoycottAutismSpeaks https://t.co/J8Re7LtSvW 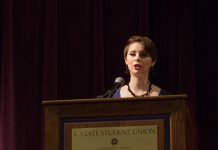 A national favorite in Miss America 2013, Wineman says she never...