The K-State men’s golf team will wrap up their 2015 fall season Monday at the Bridgestone Golf Collegiate. The tournament will begin on Sunday and takes place on the Grandover Resort East Course in Greensboro, North Carolina.

“We are looking forward to competing this weekend in Greensboro,” head coach Grant Robbins said to K-State Sports. “This is probably the deepest field we have played in so far and the golf course is a really good test. The key for us this week is to play smart, keep the ball in play and stay patient. You can make some birdies there, but you cannot force it.”

The Wildcats are coming off of the David Toms Intercollegiate in Baton Rouge, Louisiana where they placed second behind the defending NCAA Men’s Golf Champion, the LSU Tigers.

K-State will have Jeremy Gandon, Kyle Weldon, Oscar Spolander, Matt Green and Jack Rickabaugh competing on the course this Sunday and Monday.

Weldon is looking to improve on his play in Baton Rouge where the senior shot 15-over par and tied for 39th place overall. Weldon found success this season, however, when he took fifth place at the Rod Myers Invitational early in the season.

Spolander tied for 16th place on his last outing. The sophomore’s tournament score of eight-over par came from scores of 72, 74 and 78.

Green is coming into this weekend’s tournament off of a very impressive outing at the last tournament. The junior shot one-over par at University Club in Baton Rouge and tied for fifth individually.

Rickabaugh has not competed at any tournaments for K-State and this will be the junior’s first tournament as a Wildcat since he came here from Dodge City Community College. He will get his first chance at competition this weekend in Greensboro.

K-State will be one of 12 teams competing at the tournament. Notable opponents for the Wildcats will be North Carolina, who is ranked 12th, and Purdue, who is ranked 20th in Golfweek’s Men’s Golf rankings. Also competing is Big 12 foe Iowa State.

This weekend’s tournament will put a bow on the K-State golf season until spring season rolls around. The Wildcats will not compete again until February’s Mobile Bay Intercollegiate at Magnolia Grove Golf Club in Mobile, Alabama. 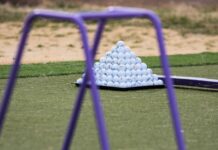