Wednesday night, the third Republican presidential debate will take place, and if the first two so far have been any indication, the debate will be a fine expose on a fascinating paradigm in America right now – a push against multiculturalism.

This paradigm is showing itself in the constant discussion of immigration, which, thus far at least, the Republicans have spent much more time than their Democratic counterparts. There is certainly a divide amongst the candidates, and a definite impact on how the Latino vote will view the discussion.

We’ll start with Donald Trump just because he is still currently the front-runner, but he’s not the most interesting voice on the matter. He is infamous for saying that illegal immigrants from Mexico are “bringing drugs. They’re bringing crime. They’re rapists. And some, I assume, are good people.” Solid caveat at the end there, Mr. Trump, really solid.

He’s even bragged in the debates that it is thanks to him that immigration has been such a hot topic to his fellow candidates. Some others have gone so far as to advocate for English as the official language of the U.S., including Carly Fiorina, as she revealed very recently to CNN on Sept. 3. Even Marco Rubio, arguably the GOP’s best candidate to appeal to Latino voters, included an English-only amendment to an immigration reform bill in 2013.

But perhaps the most interesting thought on immigration and citizenship came from one Jeb Bush, who said on Sept. 22 that “We should not have a multicultural society.”

His statement, though, is not as harsh as it sounds, as he was not arguing specifically against respecting other cultures but instead was trying to mark a delicate difference between multiculturalism and pluralism, with the difference basically boiling down to the issue of cultural assimilation in America.

Multiculturalism, Bush would say, is too culturally isolating, while pluralism lets multiple cultures come together, but still demands a strong unity of “American value.” Immigrants, in other words, need to assimilate by embracing the U.S.’ shared set of values.

“We’re a pluralistic society,” Bush later said, before a campaign event. “We’re diverse, we have people that come from everywhere. We’re not multicultural. We have a set of shared values that defines our national identity, and we should never veer away from that because that creates the extraordinary nature of our country.”

So while Bush is much more nuanced than his contemporaries like Donald Trump, he is still misguided, fixating on assimilating to an “American ideal” that supposedly cannot be improved upon by the influence of other cultural values. Paradigms like his simply allow for even worse anti-immigrant ones to foster, like Mr. Trump’s idea to mass deport an estimated 11 million illegals.

The event that this strict deportation idea reminded me of was a similar mass deportation – rooted in fear, multicultural ignorance and American exceptionalism – the Trail of Tears and the treatment of Native Americans in the 1830s. And I, apparently, was not the only one to get that eerie feeling.

Claudio Saunt, history professor at the University of Georgia, examined this phenomena in his article “The First Time America Tried Mass Deportation It Was a Disaster,” published Oct. 25 by Politico.

Of that decade in American history, Saunt said, “the federal government uprooted some 80,000 Native Americans from their homes and forced them west of the Mississippi, into what is now Oklahoma. It was a humanitarian disaster and remains one of the most shameful episodes in the country’s history.”

He later overcomes the surface-level difference of legal status by detailing the surprising similarities between the treatment of Native Americans then and illegal immigrants now. This list, which I’ll very briefly summarize, included they are both reviled minorities, occupying a legal netherworld and facing the same threat of state-sanctioned and state-administered deportation.

And yet, here we are again. Attacking sanctuary cities, silencing bilingualism, demanding strict values of assimilation and even threatening the horrifying prospect of mass deportation.

How can we still dare do such disgusting injustice to the legacy of Native Americans welcoming the pilgrim immigrants into the country? We should continue to respect our history as a nation of immigrants, and absolutely not try and force our own personal vision of assimilation on others doing the same in order to call them true Americans. You don’t have to coat each single ingredient in salt and butter (American values if I’ve ever known them) before you throw them in the melting pot to make a good stew. 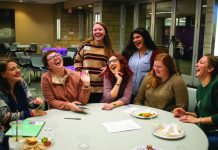