Today is the day that we celebrate the pumpkin. The orange gourd is often already celebrated during the month of October through the carving of Halloween jack-o-lanterns. Many Twitter users are posting pictures of their carved pumpkins to promote the celebration of National Pumpkin Day.

"Why, Miss Elphaba, look at you. You're beautiful!" #NationalPumpkinDay pic.twitter.com/SwciMQUVt5

Celebrate #NationalPumpkinDay with us by snapping a selfie with some of our local residents! #eatnowcaffeinate pic.twitter.com/BSAUqgPbhL

Others are discussing their love for pumpkin flavored foods and drinks, not just the vegetable.

In celebration of #NationalPumpkinDay, we invite you to indulge in Pumpkin Cheesecake from @Cheesecake Factory! pic.twitter.com/vyxBcGNYV5

But not everyone enjoys the pumpkin flavored items of the season and can’t help but express the hatred.

Am I the only person who thinks Pumpkin Spice lattes taste like vomit? #NationalPumpkinDay

However, there are historical facts about the uses of pumpkins floating around on Twitter as well, just to keep things interesting.

Happy #NationalPumpkinDay! #Fact Pumpkins were seldom used by Indians for food, more for storage & matts to sleep on pic.twitter.com/6SYzgN6oOV 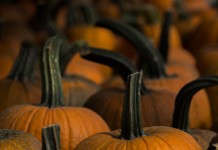 The great pumpkin: more than just a latte

The great pumpkin: more than just a latte