“The average debt of a veterinary student upon graduation is about $180,000 and the beginning salary average — and these are national numbers — is about $65-68,000,” Moran said.

According to Ben Suchsland, third-year student in veterinary medicine, the impending costs are a very important factor when considering an education.

“Student debt accumulation is the primary concern on the mind of most every veterinary student,” Suchsland said. “Students understand that a quality education is going to cost, but the rate at which tuition increases are outpacing the rise (or lack of rise) in salaries is appalling.”

According to the Association of the American Veterinary Medical Colleges, the organization that represents the veterinary medicine institutions in the U.S., tuition has doubled over the last decade for veterinary students.

“Knowing that I will be nearly $200,000 in debt is something that I have had to be conscious about going into this field of study,” Laura Sellers, sophomore in animal sciences and industry, said. “Although this is definitely a concern, it has really put my education into perspective and has solidified how passionate I am about becoming a veterinarian.”

There are, however, some loan relief options provided by the federal government that were created as a strong incentive for graduates to take jobs in the nonprofit or public sector. According to the Student American Veterinary Medical Association, if a veterinarian works full time in certain jobs for 10 years, such as public health or shelter medicine, their loans will be forgiven.

In addition, according to the Department of Agriculture, the Veterinary Medical Loan Repayment Program will pay up to $25,000 each year toward loans of veterinarians. The veterinarians are required to serve for three years in parts of the country where there is a shortage of veterinary medicine, usually rural communities.

According to Suchsland, the costs attached to veterinary school might potentially outweigh the benefits.

“Surveys of recent veterinary graduates find that given the chance to do it all over again, more than half say they wouldn’t choose to attend veterinary school due to the financial burden,” Suchsland said.

Suchsland said that these worries may pose a real problem to the profession during a critical time.

“I feel this poses a real challenge and threat to the profession at a time when the importance of veterinary medicine in dealing with matters of food safety cannot be over-emphasized,” said Suchsland.

Moran said the tremendous expense it takes to become a veterinarian, the large amount of debt a student will acquire and the modest salary they would earn are only part of the challenges facing the field.

“And at a time in which food safety is so important to the consumer, but also to the producer,” Moran said. “Those two things coming together, huge amounts of debt and not significant amounts of income, mean that we have a challenge in educating and training the next generation of veterinarian medicine.” 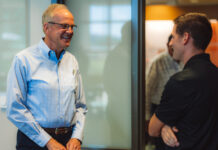 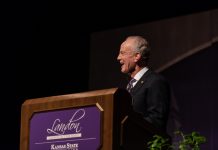