Today Twitter is celebrating National Chocolate Day, and people couldn’t be happier about it. This “holiday” comes only a few days before Halloween, giving us all one extra reason to go out and buy a little something sweet. Chocolate comes in just about any form imaginable.

Is #NationalChocolateDay a real holiday? not sure but we won't fight u on it. ??? pic.twitter.com/1lrvqGDBFi

Some official Twitter accounts are taking advantage of all the attention on National Chocolate day by pushing their most enticing treats.

It's #NationalChocolateDay! Tell us- which treat are you craving? pic.twitter.com/gLTiAkN9n3

And others are posting delicious recipes that will have even the worst chef trying just one more time.

All and all, the Internet is just a little excited about National Chocolate Day.

MMMMMmmmm it #NationalChocolateDay?!!?!?!? Me celebrate best way me know how!!!!! pic.twitter.com/PhxboMjHNK 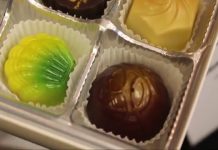