The United Nations General Assembly 68th Session declared 2015 to be the International Year of Light and Light-based Technologies. The worldwide initiative stresses the significance of “light and optical technologies in citizens’ lives, for their futures and for the development of society.”

According to K-State Today, K-State’s physics department hopes to connect the International Year of Light concept to the Manhattan community as part of this global celebration. The department will host a free event that’s open to the public during which K-State Physics Club members will conduct “hands-on light and optics activities” and Chris Sorensen, university distinguished professor of physics, will give a teaching demonstration.

The event will be held in Cardwell Hall Saturday at 11 a.m. The demonstration by Sorensen will take place in Cardwell 101 at noon.

The USD 383 school board discussed the search for a new superintendent on Wednesday, according to KMAN.

Bob Shannon, the district’s current superintendent, will take his leave this summer.

KASB representatives said that the search for superintendent candidates will involve the assistance of community members, as well as district school board members. Acceptance of each candidate’s application, as well as interviews and background checks, are all included in the KASB search team’s selection process.

The school board has decided to meet with the KASB search team again on a later date for a deeper discussion about the search process.

Riley County police officers filed a report for the theft of a Hertz Rental vehicle that occurred in the 5500 block of Skyway Drive.

According to RCPD’S report, the Hertz Rental vehicle, a 2015 Chevy Traverse, was not returned to Hertz Rental by a customer. The vehicle is valued at around $29,000 and was rented sometime in October of this year.

The vehicle was recovered Wednesday after it was reported missing to police.

There were no arrests made or citations issued for this case at the release time of the report. The investigation of this incident continues. 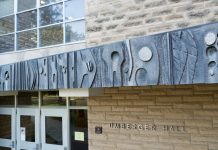 Galactic expansion can be understood in terms of bread dough, guest lecturer says 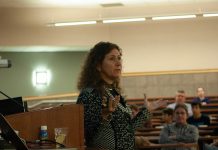 The future of black holes is brighter than you’d imagine, guest lecturer says