Kansas has finally done it. As of right now, it looks like in 2017 K-State will not only be a more expensive school, but also a more dangerous one.

Bryan Lowry of the Kansas City Star wrote in April that, as of July 1 of this year, Kansas residents are now able to conceal carry under a few restrictions and conditions. Although campuses have temporary exemption of the law, it will go into effect for them on July 1, 2017.

That’s right, under new Kansas law you no longer need a permit to carry a concealed weapon. The Kansas Board of Regents sent surveys to students to help make a decision on whether or not to allow the same bill on college campuses across the state last week.

The survey consisted of questions such as: would you pay money for extra security? Do you support the carry of firearms on campus?

First, let’s look at some of the numbers.

According to the Gun Violence Archive, its data tells us the story from Jan. 1 up to today what our current lack of gun control has caused.

These numbers are constantly rising, since the site is a live tracker.

Looking at these numbers, I stand outraged. Here, in the greatest country in the world, we still have one of the worst gun control policies. At times, I wonder how we could even reach a point where over 11,000 people are killed in situations involving guns over 10 months’ time.

Then, it all became clear. I received a survey asking not only if I am OK with allowing the carry of guns on campus, but also if I am wiling to pay extra money for more protection on campus.

This ignorance is why we have had over 50 school shootings in the U.S. this year alone, as detailed in international news organizations like RT, with data drawn from the Kansas City Star.

The basis of allowing guns on campus is the “good guy shoots bad guy” theory: if everyone has a gun in a public place then, in theory, nothing should ever happen because the fear of the good guy having a gun should stop or at least deter the criminal.

Unfortunately, this has been proven to not work. In fact, there are many stories of “good guy” shootings that fall short of their claims, with these examples detailed by Politico in their article “The myth of the good guy with the gun.”

Joseph Robert Wilcox tried to stop a shooting in a Wal-Mart in Las Vegas by drawing his concealed handgun but was instead killed by the assailants, whom then began a firefight with police.

This leaves us to ask if there are any ways to stop these shootings at all. That answer is yes.

During a robbery in Tuscon, Arizona, Joe Zamudio heard gunshots and ran into the store. By the time he arrived to the store, unarmed civilians had already disarmed the shooter. According to Politico, Zamudio later said that he was within seconds of killing the wrong person.

How do people around K-State feel about concealed carry on campus?

“The only benefit from this is that people who have intent to kill will fear people stopping them, but in return normal students will have fear from any random person carrying a gun, especially without a license,” Rey Irwin, junior in secondary education, said.

Charles Moore, sophomore in mechanical engineering and vice president of the Wildcats Gun Rights Club, also said he disagrees with the new law.

“I feel like it’s crazy; people have the right to conceal carry but people need a permit to learn how to use them,” Moore said. “We can’t just throw people to the wolves with dangerous weapons.”

The fact that even the vice president of a gun rights club is against concealed carry without a license should help us imagine how all the people who do not support guns – even with a permit – feel.

Having guns on a college campus is not a good idea. You are allowing a large group of people who are many times under gigantic amounts of stress or frequently intoxicated or not in the most sensible or mature state of mind to carry a gun on them at anytime.

Lastly let’s discuss the security measures K-State will have to enact before this bill can take effect.

According to the Wichita Eagle, the law states that guns “shall not be prohibited in any state or municipal building to concealed carry, unless such building has adequate security measures to ensure that no weapons are permitted to be carried into such building.”

Later on, the article states that adequate security is considered “‘use of electronic equipment and personnel at public entrances to detect and restrict the carrying of any weapons’ into the facilities, ‘including, but not limited to, metal detectors, metal detector wands or any other equipment used for similar purposes.’”

So how is Kansas planning on paying for all these extra security measures?

While not confirmed, the only mention so far has been an increase in student tuition to help afford the additions of these to the schools, as brought up in the survey sent to K-State students last week.

Finally I ask this of you: If you haven’t responded to the survey yet, think twice before answering.

The idea of concealed carry sounds great in the mind. More freedom and more rights equals a better world. But, when you are thinking about your rights, think about all the people who are going to be living in fear of just getting an education.

Think of all the people who have already been affected by mass or school shootings.

Think about how this year we have had more children die from guns than days in a year. Think past all this issue’s ignorance before you make your decision.

Support a more free world where guns won’t control how your education is taught.

Do something for your community. Say no to concealed carry.

OPINION: Concealed carry should be decided by campuses, not the state 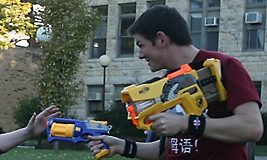