On Monday morning, University of Missouri System President Tim Wolfe stepped down after a week of protest over his inaction in dealing with multiple racist events on campus.

One of the biggest cogs that forced the resignation was the Missouri football team’s decision, led by their African-American players, to boycott all football-related activity until the hunger strike for Wolfe’s resignation ended.

Sure, protest by the activist group Concerned Student 1950 got the ball rolling and Jonathan Butler’s hunger strike garnered national attention, but let’s be honest; the majority of people – especially white people (including myself) – did not fully understand the situation in Columbia until the African-American members of the Missouri football team sent out tweets proclaiming they would not play unless a change was made in the Mizzou administration.

That was the tipping point. College football was the spark plug that ignited social change in Columbia, Missouri.

Now, of course this change had little to do with the actual game of football. College football, first and foremost in America, is all about money; millions of dollars hung in the balance for Missouri if their team wasn’t in Arrowhead Stadium this Saturday to take on BYU.

At the end of the day, Wolfe’s job wasn’t worth the enormous bill that was coming for Missouri and the Board of Curators flung Wolfe at the mercy of the crowd chanting for his resignation.

Money made it happen.

You see it happen in college sports all the time. Coaching changes are executed because donors pull money from the university, stadiums rise and fall because of money and sometimes your favorite athletes come to your institution because of money.

In a world in which money is power and money is speech, the Missouri football team tapped into a very strong and loud megaphone when they decided to take their stand on Saturday.

While their action is being universally lauded as brave, the fact that it prevailed sets up a very interesting and potentially explosive precedent.

The numerous 18-to-22-year-olds around the country who are on scholarships at any university now have a lot of power, and the Missouri football players just opened the Ark of the Covenant.

Just because Missouri players decided, for all intents and purposes, to strike for a selfless cause, how long until the “pay for play” movement chatter starts to increase? What if players turn against their coaches in a losing season?

According to the New York Times, college football nets a cool $7.3 billion from ESPN alone over a course of 12 years; that doesn’t include ticket sales, branding, donations or money from the university such as student fees.

That’s a crazy amount of money.

Do you know what you could do with $7.3 billion? Anything… literally anything.

Would you like to buy an island? With the most expensive island on Private Islands Online listed at $160 million, you could afford a whole chain of private islands, each one better than the last.

Would you like to go to space? With each trip on a space shuttle running you a mere $1.5 billion, according to Forbes, you could visit the final frontier roughly four to five times.

Would you like to build a Statue of Liberty-sized monument of 1980s soul-pop sensations Hall & Oates? Why stop at just one, when you could construct 97 glorious monuments to the greatest thing to come out of Philadelphia since Will Smith?

The possibilities are endless.

That power is now in the players’ hands if they choose to wield it. They could use it as a wrench or a broad sword, and the honest truth is that there is nothing anyone can do about it.

In the end, if they do choose to tap into that power, it probably wouldn’t affect the average fan. They want to play football, and you want to cheer them on and watch it. As it is now, for it ever shall be.

But the faces in shadows in the Big 12, Pac-12, SEC, Big 10, ACC and beyond who profit immensely from these student athletes’ performances better take heed.

It only took one team two days to make a university president’s head roll — 128 FBS teams united might cause a bloodbath. 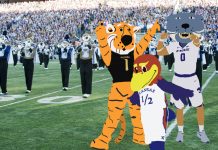 Get rid of your purple: K-State merges with University of Missouri just to spite KU 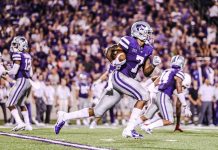