Back in June, the Collegian’s Jonathan Greig, senior in anthropology, posed a question to readers.

“If we could magically hit redo and choose … who we idolize, do you think we would pick movie stars and quarterbacks? Or would we choose scientists and teachers?” Greig wrote in his June 9 piece. “It’s an important question because we do have that choice.”

Now, in the wake of photos regarding Dallas Cowboys defensive end Greg Hardy released on Friday by the sports news website Deadspin, it’s time for the public to answer.

The 47-plus photos from the night of a May 2014 domestic violence incident chronicle the damage done to both parties in heartbreaking detail. They include measurements of bruises, some over an inch in diameter on Nicole Holder, Hardy’s ex-girlfriend, including on her arms, legs, chin and back. They were taken by police within 24 hours of the incident, according to Deadspin.

The details are widely reported. According to the article “Police Records Shed new Light on Greg Hardy Incident” by the Wall Street Journal, Hardy was arrested after the incident and then sentenced in July 2014 to a suspended 60-day sentence with 18 months of probation. In February 2015, the case was dismissed before appeal after Holder stopped cooperating with the investigation.

In March, the Dallas Cowboys signed Hardy, and in April the NFL suspended Hardy for 10 games, which was later cut down to four by an arbitrator who ruled the length of the suspension was inconsistent with previous league suspensions for domestic violence.

On Thursday, the Charlotte Observer’s media partner, WBTV, reported that the charges against Hardy were expunged.

While prosecutors in the case have said Holder reached a civil financial settlement with Hardy, one quote from the night of the incident, as reported by Deadspin, stands out, and it’s what Holder reportedly told officer Jeffrey Kendrick.

“It doesn’t matter,” Holder said to Kendrick. “Nothing is going to happen to him anyways.”

Holder initially refused to talk to police or let them take photos of her on the night of the incident; it was only after going to a hospital and calling the police through her lawyer that she finally consented to a full interview and let police take detailed photos of her injuries.

That shouldn’t be the case.

It is completely wrong and totally misrepresentative of all the good we stand for as a country that a victim of domestic abuse should ever feel they are alone or that the person who hurt them will get away with it, something it seems Holder very likely felt that night.

This is not an issue against the NFL itself either. As the history I detailed above shows, the league tried to suspend Hardy for more than half a season, but the powers that be dictated that the league couldn’t legally do that.

This also isn’t an issue with all NFL players because the vast majority of them are good and do great things for their communities. I’ve never grown up as a Kansas City Chiefs fan — I’m from Arizona so I root for the Cardinals — but I can’t imagine there were any sports fans who weren’t happy when they heard that Chiefs safety Eric Berry got his first interception in October after being diagnosed with lymphoma last November.

There is plenty of good to look up to in the NFL and in sports in general.

Still, when the legal process lets down a victim of domestic violence, as I believe the system has let down Holder, we as fans of sports and entertainment in general have to ask ourselves where we draw the line, which brings me to the Dallas Cowboys.

Last week, before these photos were released, Cowboys owner Jerry Jones called Hardy “one of the real leaders on this team.” While Jones has said since that the organization does not condone domestic violence, his actions in signing Hardy utterly contradict his own statements.

Hardy, legally, is innocent, but as we’ve seen with other entertainers such as Bill Cosby and O.J. Simpson, the court of public opinion follows a very different set of rules. That he plays for a team so often referred to as “America’s team” is an embarrassment to us as fans and as a country. More importantly, however, it is a clear call to use our power as a tax-paying, sporting-event-ticket-purchasing public to make a statement.

Let us make a statement and enforce justice where the league and the legal system no longer can. Let us speak out against Jones and the Cowboys and force them into action with the roar of our collected opposition. Let us discourage those who would buy Cowboys’ gear and tickets from doing so, thus making the statement that we will not tolerate domestic violence from anyone in society, regardless of their place or position.

If we do not make that statement now, when so much heartbreaking, tear-jerking and irrefutable evidence exists, then we are choosing to make a different statement, one we must absolutely not make.

We are choosing to tell all victims, especially those afraid to come forward because they feel nothing will happen, that they are alone and justified in their fears.

That is bullshit, because they are not. 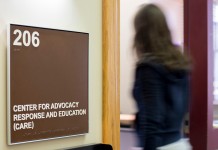