The Crimson Tide are coming off what is easily the most impressive win they have had this year. They are once again in control of the SEC West if they can win out. Alabama defeated LSU 30-16 behind a strong running attack led by Tide running back Derrick Henry and his 210 rushing yards. Mississippi State is coming off a 31-13 win against the Missouri Tigers.

This is Oregon’s last attempt to salvage the season and have a chance to compete for the Pac-12 title. Unfortunately, the Ducks have to play at Stanford, and it will not be easy for them. Oregon is coming off a home win against Cal by a score of 44-28. Stanford is coming off an easy 42-10 victory over Colorado. With a victory, Stanford can clinch the Pac-12 North.

Arkansas is coming off one of the most bizarre finishes in college football this year, and there have been a lot of crazy finishes this year. They won an overtime shootout by a score 53-52 over Ole MIss. They converted a fourth-and-25 in overtime to help propel them to victory. LSU is coming off a disappointing loss to Alabama. The Tigers could not get anything going on the ground against the Alabama run defense, and they lost by a score of 30-16.

College GameDay will be in attendance for this Big 12 matchup. Oklahoma can get right back into the title hunt with a victory over Baylor. The one-loss Sooners are only a game behind Baylor and Oklahoma State in the Big 12 Conference Football Standings. These two teams and TCU are still left on the Oklahoma schedule. The Sooners are coming off a victory over Iowa State by a score of 52-16. The Bears are coming off a tough Thursday night victory over K-State by a score of 31-24. Baylor’s freshman quarterback got to experience what it is like to be a Big 12 quarterback. We will see how he does against the Sooner defense.

The Sooners and the Bears will kickoff at 7:00 p.m. Saturday on ABC. 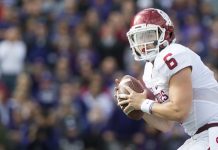