The protest at the University of Missouri is irrational. This institution — which holds the claim to the first journalism school in the world — was named one of the top 50 public schools by U.S. News and World Report.

This university, its faculty and students seem to have forgotten their priorities.

There, I said it. The students and faculty protesting about “Concerned Student 1950” are in the wrong. This is not to say that former University of Missouri president Tim Wolfe and his staff were in the right.

In the video “#ConcernedStudent1950 vs the Media” students and faculty can be seen dismissing Tim Tai’s rights as a journalist to take photos in a public space. A professor of communication even yells at Tai, telling him “you need to back up.”

This video demonstrates how blatantly embarrassing the protest and hunger strike are for the University of Missouri.

The idea that a black student had to starve himself to obtain the administration’s attention is embarrassing.

The idea that a black student was literally willing to starve himself to death to remove a president from his position is embarrassing.

The idea that a journalism school doesn’t understand the First Amendment rights of a journalist is embarrassing.

Students involved in movements across the nation have formed their own version of the First Amendment and tailored it to fit their specific needs.

What do these protesters, who deny that they would accept any media attention, wish to prove? Without the media, this cause would be simply an unresolved issue. Yet, the University of Missouri — a school known for its journalism program — is screaming in the face of student journalists trying to do their job.

The media has somehow become the enemy of “Concerned Student 1950.”

This is a message for Mizzou students: the media isn’t the opposition here, but people spreading racial hate are. 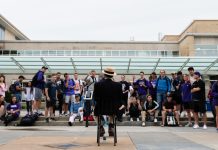