The K-State men’s and women’s cross country teams finished their 2015 seasons on Friday at the Midwest Regional Championships at Rim Rock Farms in Lawrence, KS as the women finished 16th and the men placed 21st.

Minnesota and Oklahoma went 2nd and 3rd for the men while Iowa State and Minnesota finished out the top three for the women.

Despite not having the highest of finishes in either division, head coach Ryun Godfrey finished the day with an optimistic outlook.

“I was proud of our efforts today,” head coach Ryun Godfrey told K-State Sports. “I believe we made some good improvements this year and I look forward to the challenges of next year.”

The K-State women’s team’s top runner all season, junior Morgan Wedekind, received the honor of being named to the Midwest All-Region squad after running a 20:56.6, placing her in 23rd overall.

Next in line for the K-State women were runners Kayla Doll and Paige Stratioti. Doll finished 71st for the Wildcats while Stratioti placed 73rd, giving both a top-75 finish.

Transitioning to the men’s side, sophomore Colton Donahue was the Wildcats’ top runner once again, placing 55th overall with a time of 31:24.9.

“This group is not afraid of working hard and so I very much enjoy coaching them,” Godfrey. “They take a great deal of pride in representing K-State and they do so in a first-class manner.”

The top 3 runners of the entire meet on the women’s side were: Erin Teschuk of North Dakota State placing first with a time of 20:07.7, Alyssa Schneider from Illinois in second place running a 20:12.8, and Sharon Lokedi of Kansas taking the third place spot with a 20:14.9.

Meanwhile on the men’s side, Marc Scott of Tulsa finished first with a time of 29:37.1. Jacob Burcham of Oklahoma then followed in the second place spot, running a 29:38.6. Rounding out the top 3 is Cerake Geberkidane of Oklahoma State who ran a 29:50.4. 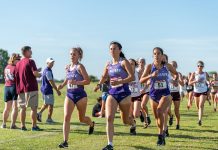 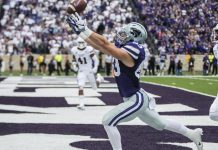