The Student Executive Committee demanded the resignation of Jessie Pringle, student body president; Zach George, student body vice president; and Adam Moon, chief of staff. The three members are asked to step down by Wednesday. The senate plans to impeach the three leaders if they refuse, according to the Lawrence Journal-World.

The committee said that Pringle and George did not “stand in solidarity with their black peers and proclaim that Black Lives Matter,” at the forum, according to LJW. Saturday, a statement was released by the three leaders claiming to maintain their positions and support minorities on campus.

“This is part of a larger pattern and some much bigger issues that (the) Senate has been dealing with in terms of our relationship with marginalized communities at KU,” Shegufta Huma, vice president of the University Senate and a member of the Student Executive Committee, said to LJW.

On Tuesday, the Public Relations Student Society of America will host Hometown Taste-Off, a food competition.

The event is a competition between local pizzerias, including AJ’s Pizza, Jeff’s Pizza, Gambino’s, Pizza Shuttle and Pizza Ranch. Participants can pay $5 to try pizza from the five local pizza shops to determine the best pizza in town.

A raffle will also take place to Chipotle and Starbucks. All proceeds will benefit PRSSA.

The Center for the Advancement of Entrepreneurship of the College of Business Administration organized the competition. To qualify, students created proposals and pitched them to judges.

“K-State Launch is an opportunity to showcase the tremendous entrepreneurial talent at K-State,” Chad Jackson, director of the center, said. “The real-world experience of pitching a business in front of the type of business experts we have on our panel is invaluable to these students, and provides real-world feedback and support to launch companies within our state.”

Harrison Proffitt and Ben Jackson, both seniors in marketing, received $5,000 for Bungii, an application that connects users with drivers. They work together to move move big deliveries or objects around town.

Drew Wills, Savannah Stewart and David Weidmaier, all seniors in feed science and management and Larisa Sica, senior in animal sciences and industry, took home another $5,000 for EnviroStarch. The company, aims to provide alternatives to plastic that are durable, cost-effective, renewable and reliable.

Edi • morphosis, a company providing cooking and snacking products that are nutritious, insect-based and high protein. The company is created by Jordan Thomas and MacKenzie Wade, seniors in anthropology.

These three teams will compete again in spring to win the chance to represent K-State in Kansas Entrepreneurship Challenge.

Awarded $2,500 for {Re}Greek, was Morgan Dreiling, sophomore in business, and Jane Chaffee, junior in mass communications. Their project is a online site to sell greek items of graduated sorority members.

ANALYSIS: K-State’s defense was the key to success in win over Kansas 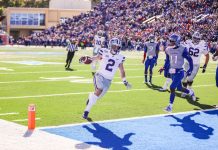 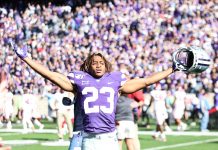