A string of coordinated terror attacks in Paris shook the world Friday night. Monday, the latest reported death toll is 132 people, with an additional hundreds wounded.

“We first thought there were four (K-State students), then we found out there were five in France at the time, one that was in Paris,” Morris said. “That night, Friday night, we were getting emails that we were tracking them down. We were looking to see who we had where and trying to get in contact with them. We work closely with the American Embassy in those countries through the State Department. They know what’s going on down on the ground.”

Efforts were made to immediately contact the students to make sure they remained safe.

“We have several ways to get in contact,” Morris said. “Before they go, we set up an emergency phone line, and we’ll monitor it 24/7. Their adviser has that line, and they can call. Two, we will try email, we will try text, and this time we saw that one of the students was actually posting on social media.”

Morris also provided written information that detailed their safety protocols, and he said that as of 12:30 p.m. Monday, all but one of the five students had responded and are safe, while due to social media activity K-State is relatively certain the fifth is safe as well.

Jenna Pelter, junior in social work, remained safe and answered the Collegian’s questions via email to take us through the attacks.

Where were you during the attacks?

When the attacks started, which was around 9:25 p.m., my roommate and I had been eating at our hostel’s restaurant. We had been planning on going out for dinner, but decided to stay in, which ended up being the best decision we made that night.

How did you find out about the attacks?

After dinner, around 9:45 p.m., we decided to walk around and find a convenient store to get something to drink. We were still not aware of the attacks, or else we would not have been walking around. Once we found a convenient store, there was a TV that the cashier could not take her eyes off of. Unfortunately, we could not read the headlines or understand the reporter because we do not speak French, but we could tell something very bad had happened.

The cashier was able to communicate to us that there had been a shooting and seven people had died. After finding this out, we booked it back to our hostel, a three-minute walk away. Little did we know that we had only been a 10-minute walk away from the nearest restaurant that was attacked and 1.1 miles away from the Bataclan, the music venue where people were being held hostage.

What was your immediate reaction and that of the people around you? What was the fear of danger?

I was freaking out, but people around me were dealing with the news a lot better than I was. Mostly people were just shocked and confused because not that much information was available at the time. When I found out how close we were located to all the attacks that took place, my fear only increased. Thankfully our hostel had Wi-Fi, and we were able to message our friends and family that we were safe.

Was there ever a moment that night when it felt like the violence had to be over?

There was never a moment when I felt like the violence was over. No one knew how many accomplices there were, if they had all died or if they were still at large. It has been three days since the attacks took place, and I still feel like it’s not over, especially now that the problem has moved north to Belgium and air strikes have increased in Syria. I believe the attacks in Paris were just the beginning of the violence that is to come.

Did you get any sleep at all?

I got very little sleep on Friday night. Fear and worry invaded my mind, not just for my friend and myself, but also for our two other roommates who had still not returned. We had no way to contact them, and the only thing we could do was pray for their safety. By the time I was done messaging all my friends and family it was around 4 a.m., 9 p.m. back in Kansas. Our hostel was also near a hospital and the sound of sirens did not stop all night, and they served as a constant reminder of all the evil that had taken place that night.

Were you already planning on going back to Ireland that weekend, or did the attacks spur you leaving?

Luckily we were able to fly out Sunday morning as planned, and the flight went smoothly with no problems.

What was the energy like in Paris the next day?

We ended up only leaving our hostel once the next day, and that was to get lunch right across the street. Even then I was on edge, 100 percent aware of everyone and everything that was happening in the store. I might have been paranoid, but I was not the only one.

The atmosphere was sorrowful; there were less cars on the streets, less smiles and less trust in humanity.

After I realized how nervous I was just to walk across the street, my friend and I decided not to leave our hostel unless absolutely necessary. Staying in my room all day on Saturday was not how I wanted to spend my last day in Paris, but I couldn’t even complain or be upset because I was alive and well.

All the support and messages that I received from my family and friends were incredible. It made my whole experience a little easier and ended up making me miss everyone so immensely. I cannot wait to be reunited with my family in Topeka just in time for Christmas and my K-State family in January. Go Cats!

Letter to the editor: reacting to tragedy 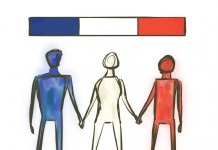 Letter to the editor: reacting to tragedy