Christian Stromgren, junior in finance, said he is a fiercely loyal Wildcat fan. If you have been to a football or basketball game recently, chances are you noticed Stromgren in the first row sporting his signature Powercat hard hat.

In his time at K-State, Stromgren said he only missed one home football game and has never missed a home basketball game. So, how did this student become such a loyal Wildcat fan? He credits it to his upbringing.

“It’s just what I grew up with,” Stromgren said. “Dad was a KSU fan. My stepmom wasn’t die-hard, but she went to Kansas State as well, so it’s just how I was raised.”

While Stromgren may be unique in his loyalty to the team, he is not unique in his upbringing. There are many people who were raised as K-State fans, so why does he stand out among the rest?

“I went to a small high school in Kansas and the gyms were never packed, but I cared about my school, so I made it my goal to make the environment as loud and intimidating as possible,” Stromgren said. “I guess when I came to college, I just kept trying to do the same thing.”

Being a “super fan” is something that, according to Stromgren, can’t be done alone. Stromgren said his friends are always there with him at the games. One friend, Jordan Smith, junior in industrial engineering, said he enjoys his experiences at athletic events with Stromgren.

“It’s a lot of fun,” Smith said. “He likes to be there early and be loud, and it’s a lot of fun to be on the Jumbotron and TV thanks to the signs he makes.”

Macy Adams, junior in agribuisness, also goes to the games with Smith and Stromgren. Adams said Stromgren makes attending games “so much more fun” for her.

“(It’s) definitely entertaining,” Adams said. “The game itself and (Stromgren). He’s so energetic and passionate about K-State sports. He always has his signs he makes and is always yelling and cheering on the Cats. His enthusiasm spreads to everyone around him.”

Stromgren has over 1,200 followers on Twitter and is well known around campus — even if it’s not by name. His real 15 minutes of national fame came last February, however, when the men’s K-State basketball team upset the University of Kansas at Bramlage Coliseum.

Drake released the album “If You’re Reading This It’s Too Late” just 10 days before the game, and after Wildcat-victory court-storming, ESPN posted about Stromgren’s sign that read, “If you’re reading this we just won.”

“It was a pretty surreal experience,” Stromgren said. “I remember reading a blog based all the way up in the Northeast that was talking about my sign. It’s funny how much attention the sign got, because I actually made it about an hour before I left for the game.”

Even though K-State football is in the midst of a six-game losing streak and spirits are down, football games are still sold out for the rest of the season, according to the K-State Athletics Ticket Office. That kind of loyalty from the entire fan base is what Stromgren said he really loves about K-State sports.

“It’s nice for our fan base to stick together,” Stromgren said. “We’re always supporting our team; whether we’ve won five in a row or lost five in a row, the unwavering support is there.” 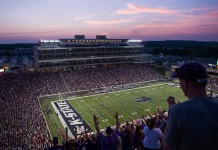 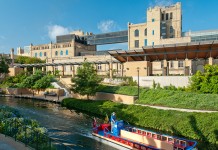 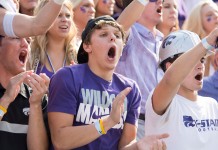