The Collegian sat down with Max Dible, sports editor of Iowa State’s student newspaper, the Iowa State Daily, to get an insider’s perspective on Saturday’s game versus the Cyclones.

Collegian: After last week’s 35-31 loss to No. 5 Oklahoma State, what is Iowa State’s mentality going forward after coming very close to upsetting a top five team?

Dible: Well, I feel like, and obviously I’m on the outside here, but that loss to a lot of teams would be really disheartening because, I mean, when you get that close. But for Iowa State, just because of where you’ve been in the last couple of years and even though they may walk out of this season with only three wins, they’re an improved team. There’s more talent. Ever since (Iowa State quarterback Joel Lanning) took over, I feel this team has played significantly better, even though the results haven’t been great. I still say that for Iowa State, the Oklahoma State loss was a step in the right direction, and I think that it is something that will motivate them and will be not deflating, but invigorating.

Collegian: Since Lanning has taken over at the quarterback spot, what has he been able to do to elevate this offense?

Dible: Just from a practical standpoint, (Lanning) brings an extra layer to the offense. He was torching the Cowboys on the ground. He rushed for over 100 yards and had a lot of big runs. I think from more of a intangible standpoint, he brings a freshness and a toughness to the team. That’s just what you hear over and over about Lanning. From his teammates to his coaches, he’s just a tough guy.

Collegian: Iowa State freshman running back Mike Warren is just torching defense this season. How good is he?

Dible: He was the odd man out. (Iowa State) had a three-headed running back corps going into this season. Mike Warren was just on the outside looking in, but in that game at Toledo, he went over 100 yards. After that he’s just gotten steadily more confident. Really, I would say, he’s got a chance to be up there in the top five for sure, maybe top three, running backs Iowa State has ever had. He put together a 1,000-yard season in eight games, and that’s no small feat. Mike Warren could rush for 2,000 yards at some point if Iowa State commits to a run-heavy offense, which they might.

Collegian: Iowa State has all of these pieces — we’ve mentioned Lanning and Warren — what’s held them back from finding consistent success this year?

Dible: It’s hard to say because they really do have a talented team. Part of it is that a lot of these guys are new here. I think lack of consistency comes from a lack of familiarity. It’s hard to gauge, too, because I think their defensive numbers are a lot better if they’re playing in the Big Ten. In the Big 12, you’re going to see crazy offensive output. They’ve had bright spots. I think part of it is that they’ve had trouble with tackling. They just haven’t tackled all that well at times.

Collegian: Iowa State has missed out on a bowl game the past three years; odds are they’ll miss out this year as well. With that lack of success, how hot is head coach Paul Rhoads’ seat going into the offseason?

Dible: Well for the first time ever, (Iowa State Athletic Director) Jamie Pollard made some comments after the Baylor game. Pollard went on the radio, and he said something to the effect of “I have confidence in this team. I have confidence in coach Rhoads, but Paul knows this as well as I do that as some point we’ve got to get the results.” He also said that how the five remaining games went for Iowa State would determine Rhoads’ future. So to me, that was code for “Rhoads was coaching for his job.” With Oklahoma State, had he won that game, he’s coming back. If they come to Manhattan and they go to Morgantown and they get beat solidly, I think it’s still up in the air. But if they can win one of these next two, that puts them at 2-3 in that five-game stretch. I think his job is safe for sure if he wins one more game. 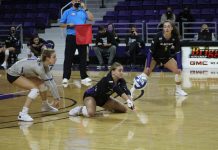 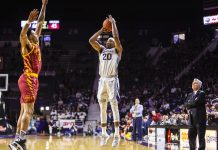