Home Community Letters to Editor Letter to the editor: reacting to tragedy

First, let me start off by saying how touched I have been by so many of the responses I have seen to the Paris attacks. People have overwhelmingly shown support, love and unity in wake of the weekend’s tragedies.

However, I have also seen an alarming number of violent reactions filled with hate and stereotypes. Whether it be through social media or in person, there has not been a day since the attacks that I have not been bombarded with these disturbing messages. Things like “Maybe all Muslims aren’t bad, but why risk taking the time to find out?” or “You say not all Muslims are monsters? Imagine a bowl of M&M’s with 10 percent of them poisoned, would you eat a handful?”

In one face-to-face conversation, I even had someone tell me that the U.S. just needs to “drop a giant bomb on the Middle East and be done with it.”

On and on, a never-ending cascade of fear-driven hate reigns among us. And yet, what’s possibly even more disturbing is the amount of support these messages are getting. There are countless numbers of likes, retweets, or heads nodding in agreement. People are rallying around these displays of “patriotism,” showing their support and unity. But with each new hate-filled response I witness, I can’t help but think how horribly wrong it is to reflect our feelings in this way.

I see many fellow students and friends of mine lashing out in their anger and fear. Not taking the time to think about the consequences of their hate-filled reactions. Not worried about the stereotypes they are spreading, or the many innocent people they are damaging with their words.

I am in no way saying that we should not react to these tragedies, but I am saying it needs to be done in the right way. Hate is never the answer. Ever. We are scared and we are angry and we are demanding justice. And that is OK, but we can’t forget what a big world we live in and that we should never judge the many by the radical actions of the few.

Letter to the editor: Using fear of terrorism for political gains 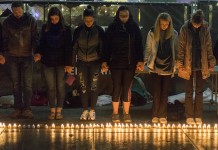 Letter to the editor: Using fear of terrorism for political gains