Last weekend was a busy one for the K-State equestrian team. The Wildcats were on the road in Dover, Delaware and faced No. 4 Texas A&M on Friday and Delaware State on Saturday.

K-State struggled against Texas A&M on Friday. The Aggies shut out the Wildcats 14-0. In the hunt seat discipline, K-State posted high scores, but the Aggies managed to come out on top.

All four of Texas A&M’s riders scored above 80 in equitation over fences.

In equitation on the flat, K-State’s Henley Adkins earned the highest score of the event with 85, but it was not enough to stop Texas A&M’s Isabelle Norton who scored a 94 with her performance to win the point.

Texas A&M went on to beat Delaware State 10-4 on Saturday. The Aggies have won six in a row and are now 6-1 this season.

K-State managed to regroup and close out the fall season on a high note with an 11-5 victory over Delaware State on Saturday. The upperclassmen led the way for the Wildcats, scoring eight of the 11 points.

Overall, head coach Casie Maxwell said she was pleased with the way the team performed this weekend.

“It feels really good to finish out our fall season with a win,” Maxwell told K-State Sports. “We rode stronger and cleaner today, so it was good to see those things being rewarded in the arena.”

The Wildcats came out strong in the hunt seat discipline. In equitation on the flat, K-State dominated Delaware State 3-1. Juniors Christina Martinelli, Gretchen Koenen, and Henley Adkins all earned points for the Wildcats. All three managed to earn scores of 86 or higher. Adkins took home the honor of Most Outstanding Performer (MOP) for her score of 92.

K-State continued to ride strong in the western discipline. It was another tie up in horsemanship at 2-2. Junior Sydney Anson carded a scoring ride for the Wildcats with a 68-64 win over Delaware State’s Alexis Gratkowski. Senior Danielle Kemper earned her fourth win of the season with a 73-69.5 win.

K-State closes out their fall season with a 3-3 record. The Wildcats will return to action on Feb. 6 against Oklahoma State in Stillwater, Oklahoma. 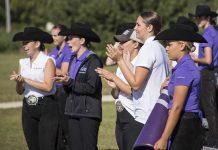 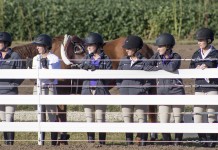 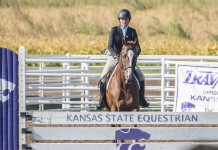 Equestrian looks to rally in doubleheader