A K-State professor has been nominated for two 2016 Grammy awards.

Bryan Pinkall, assistant professor in the school of music, theater and dance, along with the Kansas City Chorale, were nominated for Best Choral Performance and Best Engineered Album in the classical music category for the album, “Rachmaninoff: All Night Vespers.”

Pinkall performed as a soloist on the album, according to his press release. The album was released in March 2015 and reached No. 1 on the Classical and Traditional Classical Billboard music charts in its first week of release. 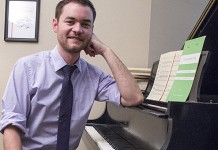