It may have been a struggle for Jeff Mittie’s Wildcats in many aspects of their Monday night game against the University of Texas Rio Grande Valley, but thanks to continued improvement on rebounding and a strong defensive effort, the Wildcats defeated the Vaqueros 61-43.

“Well, I thought offensively it was a struggle most of the night for us,” Mittie said. “We just seemed to really struggle moving the basketball. We’ve got a lot of areas to get better at. The areas I’m pleased with — rebounding has really improved over the last two weeks.”

The Wildcats found early scoring and strong defense in the first quarter. After Rio Grande Valley’s junior forward Mary Savoy hit a shot at the 5:33 minute mark in the first quarter to give her team an 8-3 advantage, K-State went on a 13-0 run that was not be stopped until there was only 23 seconds left in the quarter. K-State held an 18-10 lead after 10 minutes of play.

Both teams scored four points early in the second quarter, and it looked to be an average quarter. After Rio Grande Valley’s freshman guard Idil Turk hit a shot with 6:05 minutes to play in the half, the lids were stuck on the baskets for both teams. The game remained in a scoring drought until Vaqueros junior forward Anushka Maldonado knocked down a 3-pointer with 1:49 minutes to play. Rio Grande Valley outscored the Wildcats 10-6 in the second quarter and cut the Wildcats’ lead to 24-20 at halftime.

Just like in last week’s game against UT-Arlington, both teams made small mistakes. In the first half alone, K-State committed 11 turnovers, and Rio Grande Valley had 10 of its own. The teams also struggled from the field. The Wildcats converted on eight of their 27 shot attempts for a 29.6 shooting percentage, while the Vaqueros went eight for 31 for 25.8 percent.

The third quarter is where K-State made its separation. The Wildcats turned up their defensive intensity after the halftime break. They shot 62.5 percent in the quarter and outscored the Vaqueros 21-9, boosting themselves to 45-29 after three quarters.

“I really think our group is doing a pretty solid job (on defense),” Mittie said. “Our rebounding is so much better.”

A big part of the third-quarter charge was sophomore forward Kaylee Page. She scored seven points in the third quarter and had a total of 13 in the game. She also contributed 12 rebounds in her double-double effort.

“We honestly just started moving the ball, sharing and hitting the open person like coach asks us to do all game long,” Page said of the Wildcats’ third quarter charge. “Things just finally found the place. I felt like we weren’t even running our offense; we were just playing with one another. Things just clicked.”

The Wildcats will have some time off before their next game. They will not take the floor again until Sunday when they welcome Florida Atlantic University to Bramlage Coliseum at 4:00 p.m. 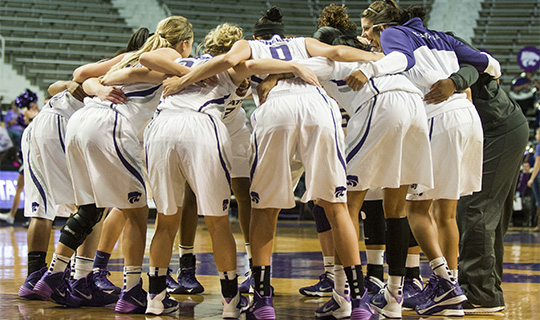