The University of Kansas has the general reputation of being the most liberal college in the state, and some students said they think K-State is behind when it comes to the general attitude toward the LGBT community.

“I hear all the time that KU is more liberal,” Melissa Ginavan, sophomore in communication sciences and disorders, said. “I don’t know if that’s necessarily the school or just Lawrence in general, but I hear that there is greater diversity in general, not just with LGBT.”

Despite this, the 2015 Campus Pride Index, a national listing of LGBTQ-friendly colleges and universities, ranked K-State with four out of five stars, above both Emporia State University and the University of Kansas, which each received 2.5 stars.

According to Brandon Haddock, coordinator of the K-State LGBT Resource Center and graduate student in geography, the center takes the responsibility of completing the Campus Pride Index, which is a self-reporting survey. The purpose of the survey is to identify areas of inclusivity where the campus is excelling, as well as areas in which improvements need to be made.

“Our (transgender) population is growing on campus, and more and more people are coming out and being open and affirming about their sexuality or gender identity,” Haddock said. “This index helps us to be able to be prepared for that, and I guess that’s the bottom line.”

In order to move up to a five-star ranking, K-State must accomplish tasks on the lists that cannot be fixed in a short amount of time, Haddock said. Some of these items include providing living areas specifically designated to LGBT community members and giving students the opportunity to identity their own sexuality outside of male or female on campus applications and post-enrollment forms.

Despite calculated rankings that place K-State above other local universities, many said they believe there is still room for improvement.

“I think generally the LGBT community feels pretty good about being on campus, considering a lot of them come from even smaller places in Kansas, and the campus allows for the meeting of other LGBT youth, which may be a first for some of them,” said Alaina Littlejohn, senior in animal sciences and former vice president of LGBT and Allies. “However, I know unfortunately those struggling the most in our community are definitely the transgender students who are having some tough times right now.”

Although discrimination still occurs, Haddock said the LGBT Resource Center has been trying to improve the campus climate since it opened in 2010.

“The past five years, this office has tried very hard to alleviate homophobia, and like I said, we are working towards opening and affirming inclusion on campus,” Haddock said.

Keeping up with social movements and using survey equipment, such as the Campus Pride Index and the University Climate Survey that was taken in 2014, are ways the university can keep working toward a more inclusive campus. This can be done at not only K-State, but at all universities in Kansas.

“What I’ve done here in Kansas is connect with other universities like KU, Emporia and Fort Hays and say to them, ‘We all want to work together, and we all want to make things better,’” Haddock said. 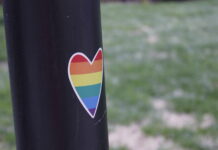 Behind the Scenes of KSU Drag