With a cheer the gates opened at 12 p.m. letting a sea of purple flood Autozone Stadium.

For Ronda Parry, 1966 alumnae, this is her favorite part.

“Oh my gosh, I want the gates to open and the flood of people to come in,” Parry said. “We’re all going to rock and roll and get excited, that’s what we’re gonna do.”

Wildcat fans grabbed posters on the way to find the best seats for the rally. Ball park food from hot dogs to nachos to pretzels and drinks were available to warm up the crowd. If that wasn’t enough, hand warmers and Liberty Bowl scarves, hoodies, and shirts available too.

Kids weaved through the crowd decked in purple and cheering hoisted on parent shoulders to see the field. Laughter and shouts arose from the crowd as friends found friends and family members among the throng of people.

For Trice Alford, ’96 alum, it is not just about connecting with friends and family, it is also about meeting new people, other Wildcats.

“I love meeting people from everywhere,” Alford said. “On the way over here we met people from Dallas, we had breakfast with people from Kansas City. (It’s) an opportunity to meet people we’d never meet and that’s really what it’s all about.”

Music blared from the speakers as everyone found seats and waited; looking forward to the team and coach Bill Snyder’s entrance. Performances ranged from the marching band to cheerleaders, pumping up the crowd between speeches.

Snyder thanks the fans filling the stadium for their dedication to the team and their support even at the end of the year as the team overcame some crazy odds.

“Let me, first of all, express our appreciation,” Snyder said. “When I say ‘our,’ I’m talking about the young people, the players in our program, the coaching staff, our support staff, all the people that are associated with this visit.”

This event is something K-State fans look forward to at each bowl game, and one that Snyder looks forward to as well.

“We appreciate Evie and the alumni office on being able to put together this traditional event, which is really very, very special event, always has been to me,” Snyder said. “I know it is to our players and our staff… We’re so proud of you and we appreciate you so much.”

Snyder’s speech and the speeches by the captains were highlights of many fan’s experience at the pep rally.

“My favorite thing about the pep rally is probably the coach and the players,” Alford said. “Their speeches when we were in Tempe, a few years ago, their speeches were really good and you go to get a sense for how much they appreciated the opportunity and the experience.”

ANALYSIS: Missed opportunities made the difference in the AutoZone Liberty Bowl

Football to take on Navy in the Liberty Bowl in Memphis, Tennessee 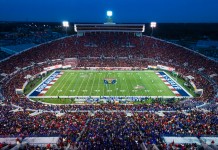