The 2015-2016 K-State Wildcats men’s basketball team is a young team. Largely made up of new faces to Bruce Weber’s program, the team has not been projected to have a very successful season in the rigorous Big 12 Conference.

That being the case, it hurts a little more when this young team comes up just short in big games.

It hurt when this team crumbled down the stretch and lost to national powerhouse, North Carolina. It hurt when they traveled down to College Station, Texas to face Texas A&M and the Wildcats’ late game rally came up just short.

And it hurt on Saturday morning when K-State lost 87-83 in their Big 12 season opener. A thrilling double overtime finish against the No. 17/19 West Virginia Mountaineers and former K-State head coach Bob Huggins.

“I’m proud of our guys,” Weber said. “They battled their butts off and did everything we asked.”

The Wildcats came out of the gate with the energy of a team that wanted to win. Freshman guard Kamau Stokes highlighted the Wildcats’ start to the game by scoring 7 of K-State’s points as the Wildcats carried a 13-12 lead at the under-12 timeout.

Coming out of the timeout, the West Virginia defense that is so famous for its suffocating press, caused havoc for K-State. The Wildcats held a 24-15 lead with just under eight minutes in the half.

West Virginia then went on a 12-1 run that wouldn’t be stopped until freshman Barry Brown buried a three-pointer at the 4:07 mark that retook the lead. The squads continued to battle back and forth and the Wildcats held a slight 34-33 lead at the halftime break.

The second half began just as exciting as the first half did for the Wildcats as junior forward Wesley Iwundu scored eight quick points in the first five minutes of the second half. The junior finished the game with 16 points and seven rebounds.

“I guess you can call it (personal motivation),” Iwundu said of his quick start out of the gate. “You always need that spark out of the half to kind of get you going so I just had to step up and make a few plays.”

The hot start helped K-State jump to a 59-53 advantage with 7:32 to play. West Virginia wasted no time in coming back, going on a 5-0 run of their own. The lead would continue to exchange hands up until West Virginia’s two-point lead nearing the final minute. Then, free throws became a critical part of the game.

Free throws were hard to come by for both teams in Saturday’s match. K-State shot 28 of 43 from the line while the Mountaineers were 20 of 31.

“It’s probably more that you’re tired…” coach Weber said about the poor free throw shooting. “I wouldn’t say that we’re a great free throw shooting team but we’re a solid one. You have to go so hard and to now go to the free throw line and relax and shoot the ball is sometimes tough to do.”

However, it was not all negative from the charity stripe. With only 21 seconds in regulation, DJ Johnson went to the line for the Wildcats down by two points. The junior sunk both shots and the game would stay scoreless for the final 21 seconds forcing overtime.

After two K-State free throws to start overtime, West Virginia scored four unanswered points, but left the door open for the Wildcats by only converting on two of four attempted free throws. This allowed for K-State to stay close and Barry Brown to hit a layup with only 1:30 left in overtime, forcing double overtime.

The score was knotted at 83-83 when West Virginia junior guard Tarik Phillip dropped a floating shot in with 1:07 to play. Wesley Iwundu would attempt to answer the score by driving to the goal for a layup.

Iwundu’s attempt was blocked and went off of K-State giving the ball back to West Virginia. The Wildcats put Jevon Carter at the free throw lines in hope of a missed attempt and a shot at the game, but the Mountaineer sophomore proved consistent by sinking two free throws to give his team a four point lead, and eventually the game.

“I think our biggest job is to keep our head up because now we have to play Tuesday,” Weber said. “Every game is going to be tough.”

The path gets no easier for Bruce Weber’s team, now 10-3 and 0-1 in the Big 12 Conference, as they’ll have to travel to Austin, Texas on Tuesday to square off against the Texas Longhorns, 8-5 (0-1), and new head coach Shaka Smart.

“You wish we would have found a way to win, we did not, but now we go to Texas on Tuesday and play a very good Texas team and whatever is after that,” Weber said. “it is not going to get easier.” 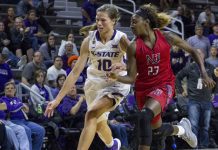 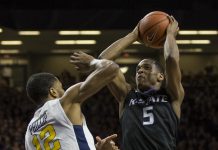