In the first month of this election year, we have a holiday that has been celebrated for decades with cancelled school and a documentary on television. This year will bring the same national traditions. This year especially, though, it is important to remember why we have a federal holiday dedicated to a man who lived 48 years ago.

Martin Luther King Jr. is a man of great importance in U.S. history, and his name remains synonymous with phrases such as “civil rights,” “racial equality” and “I have a dream.” It seems ridiculous to give a history lesson about one of the most influential men in the last 50 years; however, the number of times Donald Trump has contradicted the meaning of Martin Luther King Jr. Day by discriminating against certain groups of American citizens proves that some people may be in need of a history lesson.

“The Martin Luther King Jr. Holiday celebrates the life and legacy of a man who brought hope and healing to America,” Coretta Scott King said in her article on The King Center’s website.

Martin Luther King Jr. spoke for those who were not legally granted a voice by the federal government. King was a key player in the Montgomery Bus Boycott (which eventually “…lead to the United States Supreme Court ruling that segregated buses were unconstitutional,” according to Moralheros.com) to addressing topics such as laws against racial discrimination in employment and protections from police brutality.

King encompassed “the values of courage, truth, justice, compassion, dignity, humility and service that so radiantly defined Dr. King’s character and empowered his leadership,” according to The King Center.

On the topics of immigration and racial equality, it could be said that Trump possesses none of the characteristics previously stated about King.

Trump has been caught discriminating against Muslims, African-Americans, women, Asians and many others during his campaign with little to no remorse.

According to a Washington Post article titled “Donald Trump is a bigot and a racist,” Trump said Muslims are a “problem” in America, and he also suggested that they should be forced to register in a database. The same article also said that in addition to discriminating against ethnic and religious groups, Trump, “publicly mocked the movements of New York Times (and former Washington Post) journalist Serge Kovaleski, who has a chronic condition limiting mobility.”

King would shake his head at the ignorance of Trump and the lack of acceptance he has for anyone who is not white.

Although it may be obvious to most that white is just a color, to others like Trump, a person’s skin color can be the determining factor for whether you are powerful or powerless.

Martin Luther King Jr. Day “is not a black holiday; it is a peoples’ holiday. And it is the young people of all races and religions who hold the keys to the fulfillment of his dream,” according to The King Center.

Although Trump is a front-runner in the 2016 presidential election, the American people, especially the younger voting generation, have the power to remember the legacy King started and why he worked so hard to create equality for all races and religions. Maybe after we remember all he did, we may think again before electing a candidate that prefers to break minority groups down in order to bring himself up. 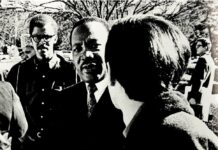 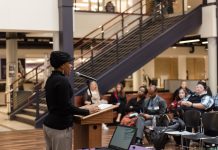