Women’s basketball head coach Jeff Mittie’s Wildcats are doing just what they need to be doing at this time in the season: taking every game one at a time. To quote late Oakland Raiders’ owner Al Davis, “Just win baby, win.”

They squeaked one out against Oklahoma State, were the victors of a defensive battle against TCU and did anything but “beware of the Phog” in a convincing win against in-state rival KU. They’ve won three games in a row, and on Sunday at 2 p.m. in Lubbock, Texas, they will look to extend the streak to four games.

It’s fair to say that K-State and Texas Tech were both on a sinking ship to start their Big 12 seasons. Both teams started out winless — the Lady Raiders got to 0-5. The only difference between the two teams? K-State got off that sinking ship. Texas Tech? Not quite.

After starting 0-5, Texas Tech earned its first win on Jan. 17 against Iowa State. The good vibes did not continue for the Raiders, however, as they were blown out in their next game against Oklahoma. Now Texas Tech, 10-8 overall and 1-6 in the conference, will try to get back on the winning track against the Wildcats.

For K-State, this could be quite the day for junior center Breanna Lewis. Coming off of a 23-point, 13-rebound outing against Kansas, Lewis will have a size advantage against the Raiders.

Tech forward Brielle Blair will likely be the only hurdle in Lewis’ way of another stellar game. Blair, the Lady Raiders’ highest contributor in the post, stands 3 inches shorter than Lewis. Blair averages 5.6 points per game and 3.3 rebounds per game compared to Lewis’ 17.4 points and 7.4 rebounds. If taken advantage of, Lewis could continue on her successful junior season.

The ball is in the Wildcats’ court. Riding a three-game winning streak and facing a lower-tier Big 12 opponent gives them all the momentum they’ll need to earn that fourth straight win. All that’s left for K-State is executing. 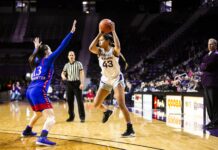 Wildcats shoot themselves in foot with 55-58 loss to Cowboys