Eleven potential Olympians competed in the meet, including 2012 silver medalist Erik Kynard, who took first in high jump with a jump of 2.25 meters.

Day one of competition kicked off on Friday with the women’s pentathlon. Senior Akela Jones dominated the event with first-place finishes in the 60-meter hurdles, high jump and long jump, a second-place finish in shot put and a third-place finish in the 800-meter run. Jones finished the event on top with a new school record and a score of 4,643 total points.

Junior Adam Deterding began competition in the men’s heptathlon on Friday. After finishing sixth in the 60-meter dash, fourth in long jump and fifth in shot put, Deterding was sitting fifth heading into the completion of the heptathlon on Saturday. A third-place finish in high jump got things started for Deterding on Saturday, and second-place finishes in the 60-meter hurdles, pole vault and 1000-meter run pushed him to a first-place finish with a score of 4,935 points.

Senior Sonia Gaskin also held two strong performances for the Wildcats. She earned her second first-place finish in the 800 meters with a time of 2 minutes, 10.55 seconds.

Gaskin also helped the women’s 4×400 ‘A’ relay team, consisting of Gaskin, A’Keyla Mitchell, Jordan Matthews and Ranae McKenzie, to a top finish and a new meet record with a time of 3:44.89.

The mile run was dominated by K-State on Saturday. For the men, junior Kain Ellis topped the pack with a time of 4:12.06. On the women’s side, junior Morgan Wedekind led the way with a time of 4:58.71.

Along with running events, K-State recorded strong performances in field events at the meet. Senior Alyssa Kelly jumped for 5.81 meters in long jump, topping the field for her second long jump win of the season.

Brett Neelly and Mitch Dixon recorded top performances for the throwers in their respective events. Neelly took first in shot put with a throw of 16.93 meters, and Dixon earned first in weight throw with a throw of 19.27 meters.

“We are progressing and that is what is most important,” head coach Cliff Rovelto said to K-State Sports. “We had some good, quality marks today. We had a lot of people off this weekend in anticipation of traveling next weekend. That being said, we are making very good progress.”

Next on the schedule for K-State is a trip to Albuquerque, New Mexico, on Jan. 30 to compete in the New Mexico Collegiate Invitational. 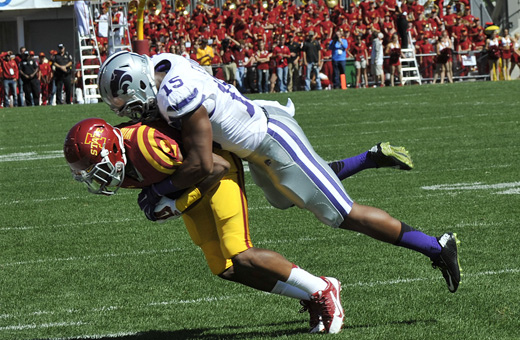