With bright eyes and a wide smile, Ryan Haxton, senior in mass communications, lights up as he talks about something he is very passionate about.

As he talks, it is easy to see the fervent dedication to his cause spilling out with every word. He speaks as someone who has a purpose, a passion and a plan.

Haxton said he is a feminist and is proud of it.

“In general, being a feminist means that you understand that the world we live in isn’t always fair, and that you understand that we have to work for equality,” Haxton said. “And that even though we’ve made a lot of progress, there’s still a lot that needs to be done for equality and for gender — how we look at gender and how we look at leadership for women and men.”

According to a poll conducted by the PerryUndem Research and Communications firm, 85 percent of Americans said they believe in equality for women, but only 18 percent would go so far as to call themselves feminists.

Haxton said numbers like these are not surprising, but are disappointing nonetheless.

“You don’t have to call yourself a feminist, but if you are working toward equality and working to create a better society, then you are a feminist,” Haxton said. “You can use the title or not, but in the end that’s feminism in a nutshell.”

In 1993, 62 percent of Americans believed society favored men over women, and by 2013, that number had dropped to 45 percent, according to data from the Pew Research Center.

But not everyone is cheering.

With only 18 percent of Americans claiming the title, the numbers do not lie when it comes to how people react to the word.

“It’s become synonymous with man-hating,” Haxton said. “There are so many stigmas attached to it that it has become this undesirable thing to a lot of people, and that’s unfortunate.”

Menninism, a popular social media trend, has become a sounding board for those who feel feminism has done to men exactly what it is trying to undo for women: discriminate.

The truth, Haxton said, is not that at all.

“The goal of feminism isn’t to take anything away from men, but to create equality,” Haxton said.

“In society, there’s this emphasis on the difference between strong men and women,” Haxton said. “And I don’t think a lot of times we associate strength or power with women, and I think that’s a major problem because it also creates this idea that men have to be strong.”

Haxton said this idea can be damaging.

“I think that there’s a stigma that if you, as a man, aren’t the strongest, then you’re the weakest,” Haxton said. “It’s this idea of masculinity, and if you don’t meet that standard of masculinity, then you’re considered feminine, and unfortunately that has a negative connotation with it.”

The concept that feminism reaches beyond just females is an idea supported by Nadezda Shapkina, assistant professor in sociology, anthropology and social work.

Shapkina specializes in gender studies and said it is possible that feminism has been geared more toward women than men because women have more-often seen oppression because of their gender.

“Perhaps there has been more focus on women in the terms of gender equality, but I would assume that would be because women are the oppressed group in most cultures,” Shapkina said. “Historically, society has centered around males. They have not seen as much of the discrimination that women have. But it is never just about men or women. When women change, men change.”

Steven and Mollie Rice, a couple from Topeka, Kansas, said feminism, and even gender equality, are not something they pay much attention to, but gender roles play a big part in their daily lives.

Each Monday morning starts out pretty much the same for the Rices, they said. After their alarm goes off, they wake up their daughter and begin preparing for the day. One of them dresses for work while the other dresses 1-year-old Jolie.
One grabs a quick bite of breakfast while the other locates a bib and baby food. Finally, Mollie heads off to work, while Steven changes a diaper.

Steven is among the more than two million men who, according to the Pew Research Center, are now the primary caregiver for their children, while the mother is the primary breadwinner of the household.

It was not an easy adjustment for the couple, who have what they said are “pretty traditional” ideas when it comes to their roles in the family.

“It was hard for me at first,” Steven said. “I grew up with a pretty traditional way of thinking, and it was the normal thing for men to go to work and women to stay at home.”

Mollie said she agreed that it was not the ideal situation, but it is a situation they make work.

“Sometimes it doesn’t always feel right, like the roles are messed up,” Mollie said. “But it works for us and it’s what makes sense for the time being, so I don’t let it get to me too much.”

A study released by the American Sociological Association titled “The Reversal of the Gender Gap in Education and Trends in Marital Dissolution” shows results of gender equality progression in education attainment and divorce statistics.

”Questions like ‘How much would it bother you if your wife out-earned you?’ and responses to the statement ‘If a woman earns more money than her husband, it’s almost certain to cause problems,’ show that men have become accepting of women out-earning their male partners,” Christine Schwartz, co-author of the study, said.

Mollie, who has her bachelor’s degree in nursing and works as a registered nurse, became the primary breadwinner of the family after Steven lost his full-time job. Steven initially looked for another full-time job, but after evaluating the price of day care, the couple decided he would work part time and care for Jolie the other two days of the week.

“Mollie has her degree and a good paying job, so it just made the most sense for me to stay home with Jolie,” Steven said.

The Rices’ living situation is becoming more common. Currently, males account for 16 percent of all stay-at-home parents as of 2012. This is a societal trend that has nearly doubled since 1989, according to the most recent data from the Pew Research Center.

What the future holds

Gender equality is predicted to continue, but at a relatively slow pace. According to the Institute for Women’s Policy Research 2015 Status of Women in the States project, women currently earn an average of 78.3 cents for every dollar a man earns, and equal pay is not predicted to be accomplished until 2058.

According to Shapkina, feminism, gender equality and gender roles are all very multifaceted and incorporate many angles, such as race, age and culture.

“Things won’t change overnight, especially if not everyone wants to change,” Shapkina said.

Haxton said education is the key to progress and destroying the stigmas associated with feminism.

“The most important thing is to have conversations and talk about what feminism really is and what it’s really not,” Haxton said. “That’s not always easy, but it comes through educating yourself.”

Mollie and Steven said the answer lies in less labeling and more focus on what is best for a family, or individuals.

“I think I’ll always feel like the man should be working and the woman should be staying home, and not because I’m against women empowerment, that’s not it at all,” Steven said. “I think in my mind I’ve always wanted to be the provider, and I don’t think there should be any shame in that. It’s OK for men to stay home, but it’s also OK for women to stay home. There shouldn’t be any shame either way. You do what’s best for your family. Period.” 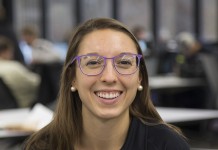 Gender equality in engineering on course of improvement