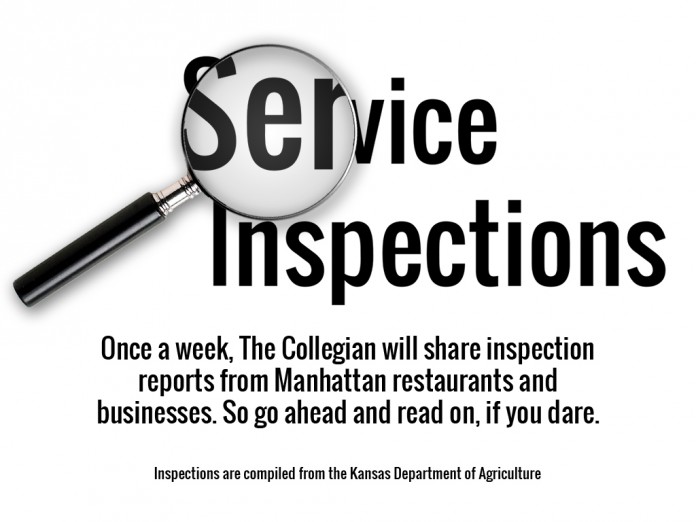 4-302.14 The establishment uses iodine as a sanitizer in the bar area, but they do not have iodine test strips.

KDA_3_30212 On the bottom shelf of a prep table in the wait station, there was a container of white granular substance without a label. The server said it was salt. Corrected on-site, labeled.

KDA_3_30412B In a container of salt, a portion cup was stored inside of the container to dispense the salt. Corrected on-site, removed.

KDA_3_30412D On the bottom shelf of a prep table in the prep area, metal pans stored as clean were stacked wet. Also, at the wait station a spoon was stored in a water well with a temperature of 57 degrees. Corrected on-site, the water was turned on to the well.

KDA_3_50116A1 On the stove top, a pan of water with butter for the corn had a temperature of 121 degrees. The manager said the butter had been put in the water an hour ago. Corrected on-site, reheated to 197 degrees.

KDA_3_50118A2 In the bar reach-in cooler, an open gallon container of milk was not date marked. At approximately 12 p.m., the manager said it was opened Jan. 24 in the morning. Corrected on-site, dated.

KDA_4_60111C The fan covers in the walk-in cooler are dusty. There is soda residue where the soda nozzles meet the soda fountain. There is food debris on the sides of the prep table in the service area where the trash can is stored.

KDA_4_90311A In the hall by the mop sink, two boxes of single-use containers were stored directly on the floor.

KDA_4_90311B In the ware-washing area, food storage containers stored as clean were stacked wet. The manager was educated.

KDA_6_50111 There is paint chipping off the ceiling in the service area. There are cracked, broken and missing tiles in the ware-washing area.

KDA_6_50112A There is food debris below equipment throughout the kitchen.

KDA_7_10211 There was a container of a white powdery substance in a container stored on the chemical shelf. The manager said it was Tide. Corrected on-site, labeled.

KDA_7_20111B By the back door at the hand washing sink, the soap dispenser is mounted on the wall above the prep table. In the wait station, there was a bag of cans of fuel for heating chafing dishes stored over single-use containers and the prep table. At least one of the containers was leaking. Corrected on-site, moved. Also, there was a container of hand-washing soap stored on a box of lemonade. Corrected on-site, moved.

KDA_8_30411A The food establishment license is not posted for the public to view.

KDA_3_50116A2 On the make table, there was shredded lettuce at 56.8 degrees, sliced orange American cheese at 44.3 degrees and Swiss cheese at 55.7 degrees. In the reach-in cooler below the make table, there was an open bag of shredded lettuce at 56.9 degrees, individually wrapped sliced orange American cheese at 45.6 degrees, 45.7 degrees, 45.4 degrees and 44.0 degrees, raw chicken at 54.7 degrees, raw bacon at 56.8 degrees and hot dogs at 55.1 degrees. The reach-in cooler was stocked around 9:30 a.m. Jan. 22, and the food items were tempted around 1:45 p.m. (past four hours). The ambient air temperature of the unit was reading 55 degrees. Corrected on-site, all of the potentially hazardous food was discarded from the unit.

KDA_4_60111C There is minor dust debris on the fan blowers in the walk-in cooler.

KDA_7_20111A There was a working spray bottle of Quaternary Ammonia sanitizer being stored directly next to a box of food-handling gloves. Corrected on-site, removed chemical.

3-302.11(A)(2) This is not cited as a violation: raw tilapia and shrimp was stored above raw ground pork. Recommend using the silo method to separate different types of raw animal foods such as beef, fish (including shellfish) lamb, pork and poultry. Please be aware that raw fish, including shellfish, pose a high risk for allergen cross-contact and must be stored so it can’t contact other foods.

KDA_4_60111A On the utensil rack to the right of the three-compartment sink, there were three clear plastic food-grade lids with sticker residue left on them and stored clean. Corrected on-site, moved to the ware-wash area. (Note: three out of 80 lids, less than 10 percent). 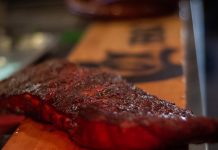 OPINION: Manhattan needs more BBQ restaurants; one is not enough

OPINION: Manhattan needs more BBQ restaurants; one is not enough