K-State was one of the last places Martin Luther King Jr. gave a speech before his death in 1968. Almost 50 years later, students celebrated his life with a vigil in the K-State Student Union on Wednesday evening.

The event featured speakers and several performances. Timothy Askew, professor at Clark Atlanta University, was the keynote speaker for the night.

“This is one of the most beautiful events I’ve seen on a college campus,” Askew said. “I’ll never forget this. This was magnificent.”

Askew gave a lecture on the Black National Anthem, “Lift Every Voice and Sing.” The lecture focused on the origins of the song and the controversy that often comes with it.

Deian Brooks, senior in marketing and president of the Kappa Tau chapter, said it was important for everyone, especially the Black Student Union members in attendance, to hear Askew talk about the origin of the Black National Anthem and to learn why they sing it before every BSU meeting.

“We thought it was so important before Black History Month,” Brooks said. “Without Martin Luther King Jr. and his final speech here, this wouldn’t be happening. We have to truly understand not only the backgrounds of each other, but ourselves.”

Along with Askew’s lecture, members of United Black Voices performed, and chapter members Dominic White, senior in architecture, and Gerrid Harris, junior in industrial engineering, put on a mime show.

Emma Owens, junior in family studies and human services and member of Black United Voices, said programs like this are significant for the K-State campus.

“It’s important to help students understand and grasp the concept of why Martin Luther King Jr. was important to us,” Owens said.

Before the closing words, seven Alphas lit a candle for the vigil and gave reasons for lighting the candles ranging from love to hope. After the program ended, everyone in attendance was invited to enjoy cookies and refreshments sponsored by the Staley School of Leadership Studies. 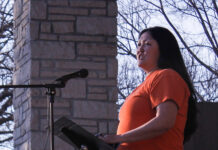