“Fueling Human Existence” is the slogan of the inaugural Technology, Entertainment and Design event (TEDxMHK), which was held in the Mark A. Chapman Theatre in Nichols Hall. Live-event tickets sold out on the day of their release, according to Abby Krstulic, junior in hospitality management and nonprofit leadership and Union Program Council Forums Committee co-chair.

“TED is a global movement, and their mission is to create ideas worth spreading,” Krstulic said. “They host a series of conferences that encourage people to share their ideas, and it’s got (everyone) ranging from authors, to people like Bill Gates, to people who just want to share incredible things they’re finding out in research or things like that.”

Krstulic said TED grants communities licenses to organize their own TED events, which pertain to those certain communities’ own interests, characteristics and areas of import.

UPC localized TED by helping organize TEDxMHK, an independent community event that featured short talks, many of which were given by K-State professors and some graduate and undergraduate students. A simulcast of the event was held at the K-State Alumni Center, as TED allows only 100 attendees at each live event, Krstulic said.

Kaitlin Flores, junior in psychology and hospitality management and UPC Forums Committee co-chair, said TEDx events inspire communities to form new ideas by acknowledging the existing ideas of individuals who are components of the communities.

“Coming to a TEDx event, or just a TED event in general, opens your mind and broadens your spectrum to so many things around the world that you would never have the opportunity to learn about by just going to a textbook, or just searching the web,” Flores said. “These are things that these speakers put an extreme amount of time into, putting things together and making up their presentations, so you learn a lot in these 18-minute or less talks than you would just surfing the web or anything like that.”

K-State advertised the event on its Facebook page with the phrase “diverse ideas ‘worth spreading'” and a photo of an all-white, all-male TEDx speaker lineup. Many people then commented on the post and said there couldn’t be true diversity of ideas among the speakers.

“On behalf of the TEDx planning committee comprised of K-State undergraduate and graduate students who are mostly women and represent several different countries, we are very excited to present this inaugural TEDx talk. We will strive to incorporate this feedback in our future events.”

Karina Michel, sophomore in communication sciences and disorders, said she attended the event with Strengths Advocates in support of the TEDxMHK speakers. Michel said the group tried for a talk slot during the TEDxMHK event but did not succeed.

“I know one of the main objectives of this TED talk was along the lines of diversity of students and the community here at K-State and Manhattan,” Michel said. “And I feel like they didn’t really reach that as much, as there are a lot of just white males that are on the TED talk, and so I think that if we were to make it a little bit more diverse, it would really help the impact of the TED talk. But other than that, I think everything about it is pretty good.”

Flores said that when mentioning its choice of diverse speakers, the planning committee meant the diversity was geared more toward the speakers’ range of topics and messages than their physical diversity.

“It’s just really important that we focused on the material that they were going to provide for our audiences,” Flores said. “It was based on the contents of their character, rather than anything that’s more up on the surface.”

Penny Lasater, event attendee from Manhattan, said that while she did notice the speaker lineup appeared to be “homogenous in scope” as far as race and gender, she had hoped most for more diversity in the speakers’ styles of presentation.

“I hope they are planning to do this again because I think that it’s great for the community, but I think there needs to be an eye toward diversity of topics,” Lasater said. “Just because it’s at a university doesn’t mean it has to be a lecture series. This is a more dynamic type of a platform, and so far, they haven’t capitalized on that, with the exception of one speaker.”

According to Lucas Shivers, event attendee from Manhattan, the TEDx event was brimming with exciting ideas that showcased K-State’s influence on the Manhattan community.

“The lineup was power-packed,” Shivers said. “The theme was fantastic. It was such a great reflection of the power and potential of K-State being so centered on global food and as a research base to share ideas. Starting off in 2016 is a great way to go. I think there’s a lot more stories to be told, a lot more people to have talk.”

“I enjoyed it,” Shultz said. “It was very inspirational. Even the stuff that wasn’t necessarily inspirational was just very informational. A lot of it was really cool to hear, and it was just overall enjoyable.” 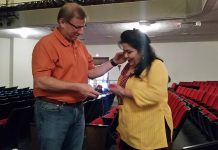