Caffeine is a staple in several college students’ diets. Juggling multiple responsibilities, students often find themselves turning to caffeine to help get them through the days and nights.

Increased dependence on caffeine has left some people wondering if they are addicted and if their habit is unhealthy.

“If you need a short-term boost of energy, there is nothing wrong with drinking a cup of coffee … but don’t over do it,” Edgar Chambers, distinguished professor in human nutrition, said.

Caffeine travels to the brain quickly and stimulates the nervous system, relieving drowsiness. It then leaves the body in urine many hours after it is consumed, according to the U.S. National Library of Medicine article “Caffeine in the diet.”

Up to 400 milligrams of caffeine is safe to produce the beneficial effects of increased alertness and energy, according to the Mayo Clinic article “Caffeine: How Much is too Much?”

One cup of coffee contains about 100 milligrams of caffeine, tea contains around 14 to 60 milligrams and a 12-ounce can of soda has around 45 milligrams, according to the U.S. National Library of Medicine article.

If someone habitually consumes over 400 milligrams of caffeine a day or drinks more than four cups of coffee, that person could potentially develop undesired side effects, including nervousness, restlessness, irritability, anxiety, a fast heartbeat and muscle tremors, according to the Mayo Clinic article.

Some people are more sensitive to caffeine than others, and small doses may result in unwanted effects. How a person reacts to caffeine is determined by body mass, gender, age and how much caffeine that person regularly drinks, according to the Mayo Clinic article.

Heidi Oberrieder, instructor of human nutrition, said the amount of caffeine is not the main health issue, but instead the issue is the amount of sugar that is typically added to caffeinated drinks.

“That’s a bigger problem because we know that the sugar and the saturated fat intake is going to increase your risk of heart disease and diabetes,” Oberrieder said.

Chambers said that if people start becoming dependent on caffeine or if their sleep cycle is being disrupted, they should try some healthier alternatives to increase their daily energy levels. Chambers said the best way to do this is to eat right, exercise and get sleep.

“I drink a lot of water and try to exercise throughout the day,” Haley Johnson, freshman in kinesiology and nutrition, said. “Staying active is what keeps me awake the most.” 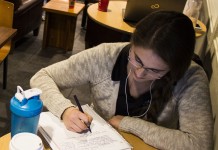 Finals week by the numbers