As many know, you can never know what to expect when it comes to attending a play. Different actors and directors have varying ideas and mindsets on how certain characters should be portrayed.

So as I settled down into seat U-52 in McCain Auditorium, I didn’t really know what to expect during this performance of “A Midsummer’s Night Dream.” That unknown, however, turned into an amazing experience.

Actors Samuel Collings, Chris Donnelly and Patrick Moy, along with actresses Ffion Jolly and Claire Redcliffe, came together to bring life to multiple characters across the play, even though there was only five of them.

Every character was fully rendered and easy to distinguish from the rest of the characters the actors portrayed.

Though it should have made the performance harder to follow, the constant switching actually helped the performance and oftentimes was used to great comedic effect. Redcliffe would often have to switch characters mid-scene and he did so perfectly every time.

Though each actor depicted at least four roles within the play, there were a few standouts, of course. Collings’s Oberon, Donnelly’s Bottom, and Moy’s Puck stood out and improved the scenes they were in.

The movements of the actors throughout the play also brought more life to their characters. Though Oberon’s floor work was often awkward to watch, it still added to the scenes he was in.

Every movement taken by the actors either played into the plot somehow or strengthened the physical comedy that was present throughout the entire performance.

This comedy also seemed to be a strength among the cast members, as it was used to great effect throughout the play. Scenes where comedic devices were used incredibly well caused raucous laughter from the entire auditorium.

The only point against this performance I can really see is that it is not for everyone. Those people who want to come and watch a performance with all the bells and whistles of a full-on theater production probably would not have enjoyed this show.

There is no set and few props are used throughout the play. This could be seen as a downside by some and affect their enjoyment of the experience.

To me, however, these minor issues were turned into great strengths. Without the glam and glitter of costumes, sets and props, the actors were allowed to put even more into the characters they were portraying.

There wasn’t anything to distract the audience from what the actors were doing, and it made the experience even more enjoyable.

So when it comes down to it, seeing the actors from the London Stage perform “A Midsummer Night’s Dream” was a highlight of my week, and I would highly recommend it to anyone who has a chance to view these actors doing their thing and doing it extremely well. 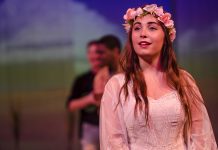 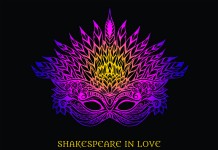 Shakespeare in Love: A Romeo and Juliet masquerade