Programs such as MAPS, Project Impact and Kompass may sound foreign to some, but to many multicultural students on campus, these programs provide scholarship, education and networking opportunities throughout the university.

Zelia Wiley became the interim associate provost for the Office of Diversity in January. Since coming to K-State in 2003, she has helped the College of Agriculture to grow in diversity over 400 percent, according to the fall 2015 Diversity Programs Office Update. The Diversity Programs Office in the College of Agriculture is the first of its kind in all of the Big 12, according to the update.

Before stepping up to take on her new role, Wiley worked to create programs such as MAPS, Project Impact and Kompass for the multicultural students around campus.

With Wiley’s new role taking much of her time, undergraduate and graduate students who have been working for the office before the switch of positions have accepted many new roles, according to Philip LeBlanc, graduate student in counseling and student development. LeBlanc has become the coordinator for the office.

“The students are in good hands with Dr. Wiley as interim associate provost and with those in the Office of Diversity with her,” LeBlanc said.

Within the next nine to 12 months, an official associate provost for diversity will be named, Wiley said. Along with the position being filled and in accordance with the 2025 initiative, students will receive a brand new Multicultural Student Center in the near future. Although the date for construction has not been set, students of all ethnicities and backgrounds have the chance to see the plans for the center, which are featured in Wiley’s office.

Wiley said every college at K-State features a diversity point person or assistant dean of diversity. This person is in charge of getting information to students in his or her college.

In May 2014, the College of Arts and Sciences named Kimathi Choma as interim assistant dean of diversity, recruitment and retention.

Currently, Wiley is serving as the Minorities in Agriculture, Natural Resources and Related Sciences adviser. Adriana Meneses, sophomore in animal sciences and industry, is the current president of the club.

“I always look forward to going to multicultural events and being able to connect with people,” Meneses said. “I was in the MAPS program for six weeks and Dr. Wiley told me to get involved in MANRRS. MANRRS has taught me to be more involved with networking and freshman development. I also got a lot of leadership opportunities.” 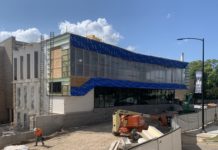 Despite pandemic, multicultural student center still on track to open in November

The Black Lives Matter movement is a ‘cry for help,’ panelist says