Ben Jackson, senior in marketing, and Harrison Proffitt, 2015 K-State alum, saw an opening in the help-app market and wanted to capitalize on it. With the development and popularity of apps like Uber, this idea could be applied to helping people move.

“One day, I had four people ask me if they could borrow my truck,” Jackson said. “After the fourth request that day, things started to get a little frustrating. For the whole rest of the day, I was thinking, ‘There’s got to be a better way to do this.’”

After a friend told him about a trip he took to Kansas City using Uber, that’s when the idea struck Jackson.

“Bingo, that’s it,” Jackson said. “A similar model to Uber, but instead of moving people, we can move large objects.”

The idea is called Bungii, a small app-based service that provides users a driver, a truck and some bungee cords to strap down their belongings. The idea recently won them the top prize of $5,000 at K-State Launch, a Shark Tank-style competition for young entrepreneurs.

“I don’t consider Bungii app a moving company,” Jackson said. “That’s not what we want to do. It’s more of what I like to call a micro-move. Something that would fit in the back of a truck. It would be perfect for a college dorm room if you have a few boxes.”

Jackson and Proffitt started working on the idea last summer. According to Proffitt, both carried equal weight in the company but specialized in different areas.

“We spilt jobs right down the middle,” Proffit said. “Ben is more of the strategy side while I’m more of the technical side. He sees the future better than I do and I offset him. I see more of the daily operations, the day-to-day things that need to be done and keep us focused while he sees the long-term goals.”

A challenge Jackson and Proffitt said they faced early on was the development of the app. They were receiving quotes from developers in the Kansas City area that surpassed their budget.

With the help of some connections, they said they were able to come across a developer who could build the app at a price they could afford.

“Fortunately we met this guy who said, ‘Hey, check out these guys in India. They are legit. They do everything I ask of them. They are great and work hard,’” Proffitt said.

The next task for Proffitt and Jackson was to write up a step-by-step layout of how they wanted the app to function and then to send it to the developers in India.

Since its inception, Jackson and Proffitt have conducted a market test that includes 350 test runs, using friends and friends of friends to assist. Alex Bentzinger, owner of Bentz Creative, was one of the individuals who tested Bungii.

“I bought a large recliner type thing that I, in no way, could move with a sedan,” Bentzinger said. “I had an opportunity to try out the app and within just a few minuets, I had a driver. They took it right over to my house. They even helped me move it.”

The way the Bungii app works is that a customer makes a request through the app, and an available driver responds to the request.

“The user, after a few steps, they will hit request pickup truck,” Jackson said. “The application will connect the driver to the user, and the user will be able to see the driver coming to them in real time. It’s all done instantaneous. The application really takes care of all the logistics that needs to be done.”

Jackson and Proffitt said they are planning to spend the next couple of weeks continuing to test the app for bugs and its real-time capabilities.

Much like Uber, Bungii will operate by using independently contracted drivers, Jackson said. Drivers will be subject to background checks, which include driving records, criminal background checks and vehicle inspections.

“We want to make sure that people using the applications can trust the drivers,” Jackson said. “We want to ensure that the users are getting the best possible drivers, especially on a moral basis.”

Jackson and Proffitt are looking into launching Bungii in the Kansas City area by May of this year and are looking to launch in Manhattan in the future. 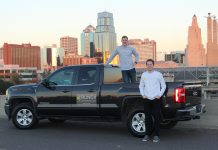 From K-State to Silicon Valley: Wildcat startup finds success in the tech world

From K-State to Silicon Valley: Wildcat startup finds success in the...