Dave Kendall, interim news director of Channel 8 News and instructor of journalism and mass communications, has worked throughout his life filming, directing and producing documentaries and programs aimed at informing Kansas citizens about Kansas history.

Kendall was born in Herington, Kansas, a small town about 54 miles southwest of Manhattan. While in college, he attended K-State and studied cultural anthropology for his first three years.

Kendall said he felt like he wanted to head more toward the West Coast, but he first attended the University of Kansas for his senior year. After graduating from KU, he spent five years in California, where he attended a small private graduate school. Kendall, however, eventually came back to Kansas to continue his studies at KU.

While studying cultural anthropology, Kendall said one of his professors suggested he combine his studies with a different field because the anthropology job field was small. That is when he said he came across the idea of media anthropology.

“I really kind of just fell into it,” Kendall said. “While I was studying at KU, I was a teaching assistant for a course called ‘Anthropology through Films.’”

He applied to do a special-studies master’s program at KU and received the approval to study anthropology and journalism concurrently. Kendall said journalism was a good way to convey his concepts.

For his thesis, Kendall worked on a documentary about the Kickapoo, an American Indian tribe local to Kansas. He worked with two professors on the project, but Kendall said it was the first time he was able to work as a director and editor of his own project. Broadcasted locally and academically, Kendall’s documentary gave him the chance to work for a local television station.

In 1987, Kendall joined KTWU, a public television station in Topeka. His main responsibility was to keep and maintain a show about Kansas on the air. Thus, “Sunflower Journeys” was born. The show is a half-hour television series that is divided into three segments about Kansas. Kendall said he took the responsibilities of being the host and cameraman for the show.

“This kind of thing was a little time consuming,” Kendall said. “I would go out on location, and I’d be shooting myself as the host.”

While working for “Sunflower Journeys” for 27 years, Kendall said he was able to work on a mix of many different documentaries.

“I think the one thing that students can get from Dave Kendall is they can learn from someone who fully understands the history of the state of Kansas,” Steve Smethers, associate professor and associate director of undergraduate studies in journalism and mass communications, said. “While working for ‘Sunflower Journeys,’ he has traveled all over the state.”

Kendall, however, said he felt like things were getting to a point where he was getting older and he wanted to start focusing on his own thing. He said he decided to quit “Sunflower Journeys” in the spring of 2015 to focus on producing his own, independent work. Kendall and his wife, Laura Mead, founded Prairie Hollow Productions.

“I started looking around to find what I would do my documentary on, and I found out this is the 20th anniversary this year of the creation of the Tallgrass Prairie Preserve,” Kendall said.

Kendall said he and his wife are working on a project called “Tallgrass Prairie National Preserve: A Flint Hills Love Story.”

Kendall said he has always wanted to work on a project about the Flint Hills because he grew up so close to them, and he believes this will be a wonderful documentary to release as the first one produced by Prairie Hollows.

“(Kendall) is dedicated to whatever it is he is working on and has high standards of journalism,” Bruce Snead, director of engineering extension and friend of Kendall, said. 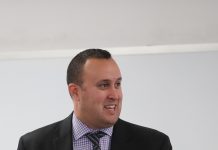